It is interesting that in both Alastair Humphrey’s Microadventure ideas and my own original list that bivvying in the garden was at the top of the list. It is surprising then that it has taken me nearly a year before I actually did it.

My daughters and I had conducted and afternoon raid on one of my favourite shops – Decathlon – fitting them both out with new sleeping bags and other goodies. This had the brilliant effect of inspiring my eldest (8 year old) to insist on sleeping out in the garden. It’s possible she was just testing, but I called her (possible) bluff and said ‘sure we can’. 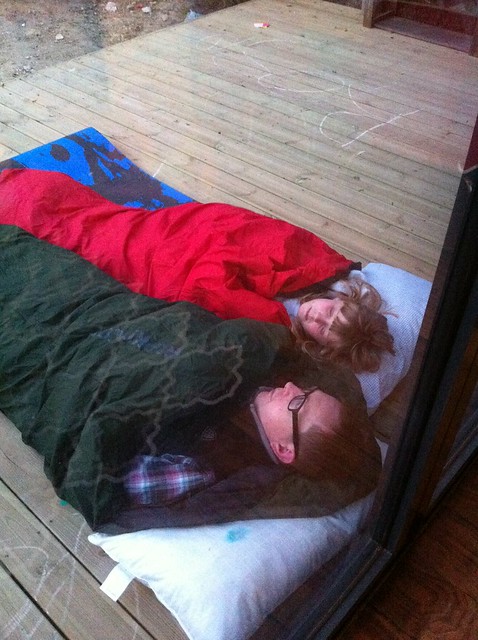 So there we were, on a balmy late May evening in our sleeping and bivvy bags on our (new) garden decking gazing up at pink clouds and Swallows (or maybe Swifts?) swooping for insects. I was pretty tired so the prospect of reading my daughter an extra long story and then having an early night was actually quite appealing.

Despite being surrounded by flats and houses our neighbourhood was fairly quiet for a Saturday night and it was mostly the chirp of birds and hum of insects that accompanied us to sleep. I was woken at 0330 by Rose telling me she was cold. I did worry that she would insist on going inside the house but after ensuring she was properly snuggled in her sleeping bag, she went back to sleep till morning. 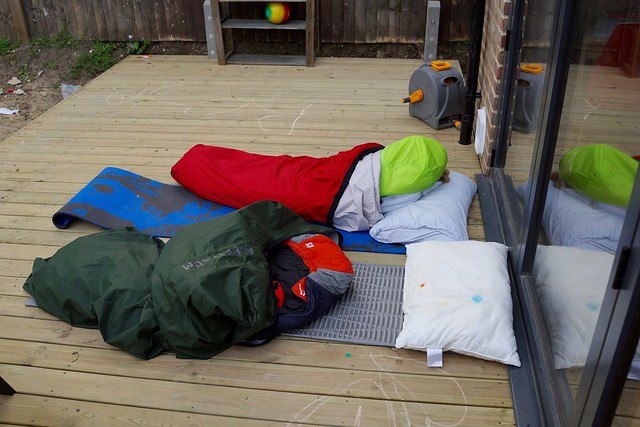 All in all a brilliant night and i’m counting it as number 7 in my #16in16 campouts this year. It is a fantastic thing to share this with my daughter and I can’t wait till next week when I can take both my kids out in the wild for a campout!

Following the Awesome January Campout I was a bit giddy with excitement and full of ideas of things I wanted do on a microadventure. One that came to mind was to add some kind of atmospheric performance into the evening. Being out in a little patch of ‘wild’, in the dark and properly outdoors, not even with a bit of tent canvas for protection makes for a good bit of edge. What if you could add to it? 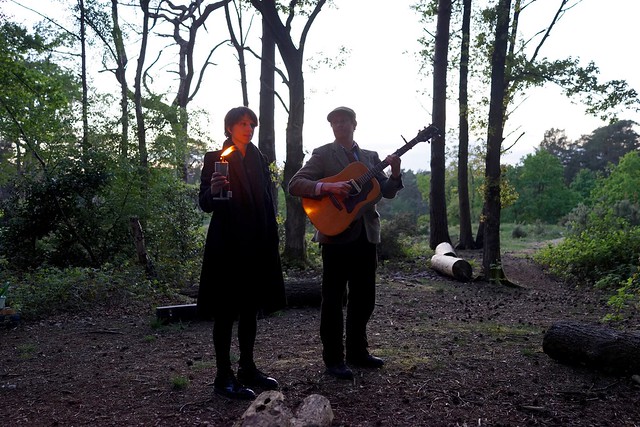 I’ve been aware of Vanessa Woolf and her work as a storyteller for some time. She has a great repertoire of stories tailored for certain settings, many in London’s urban and derelict areas but others in places i’d take a campout. Could this be a good combo? I felt sure that it could. 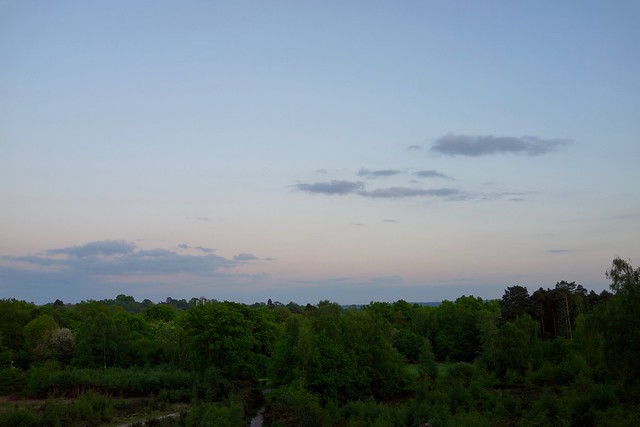 I did a recce of Oxshott Woods last week and found it both a brilliant bit of ‘secret wild’ in suburbia and a great place for a large group of microadventurers.

I took a small group from Waterloo and met up with the rest at Oxshott station before heading up into the woods. In 10 minutes we were at a nice little camp area with some logs to sit on and by 9pm we were ready for the show to start. 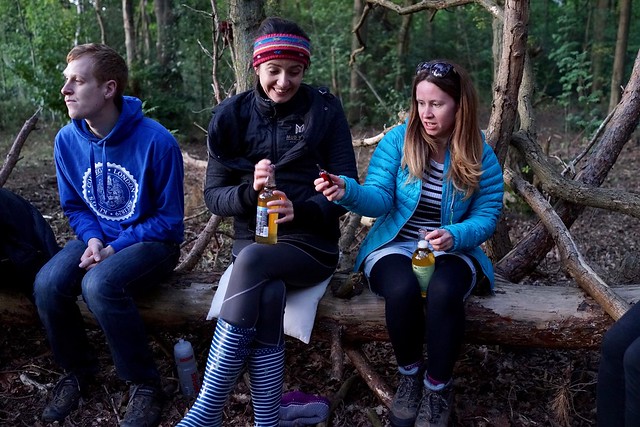 We were treated to a couple of songs from George, one of which was about ‘Spring Heeled Jack’, one of my favourite London folklore characters. Vanessa gave us three stories, one suitably based around a woodland (which was great). The other two were actually quite scary, particularly given that we were about to sleep out in a wood over night. At least we all had each others company! It was everything I had hoped for. 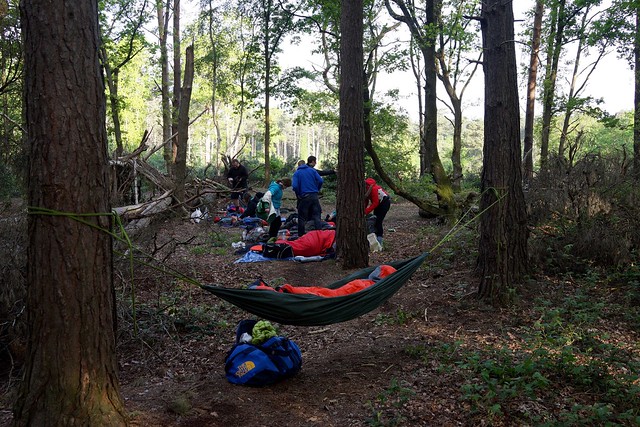 I slept in my hammock again, cementing my love for this type of camping. I had, however, allowed a lot more ‘give’ in the tension this time and definitely found it less comfortable. I think I quite like a flat hammock bed. We were all treated to a star filled night with a half moon.

Contrary to my normal sleep-out habits I ‘slept-in’ till just after 7am. This meant that packing, breakfast and coffee were a bit rushed. On the coffee front, i’d brought a (borrowed) hand coffee grinder and was able to make myself a lovely aeropress. I really must get one of these for myself, very handy. 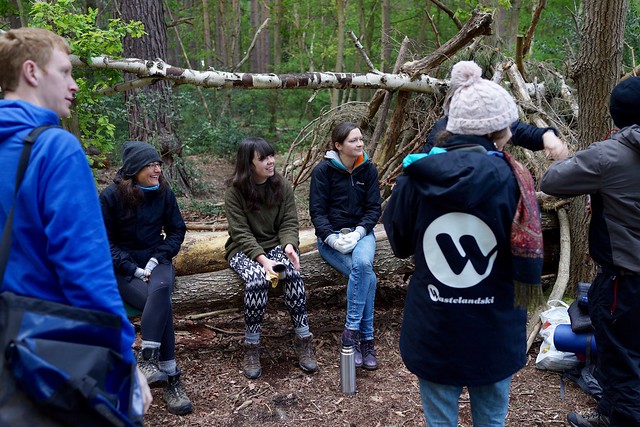 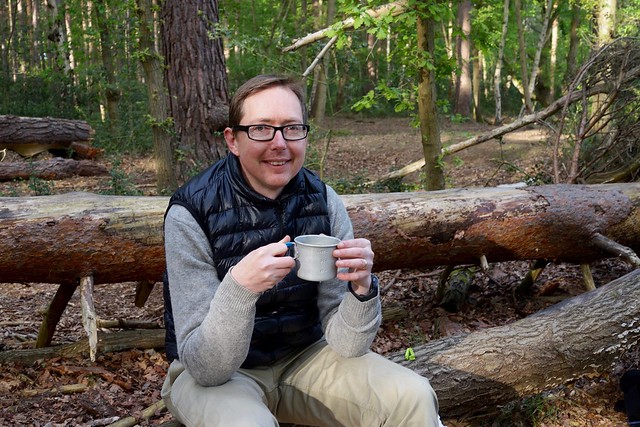 All in all my 6th #microadventure of the year was really lovely and i’m looking forward to more soon! Still nicely on track for #16in16.

I was a bit busy in April which meant I didn’t manage any #microadventures. I did squeeze in a trip to Iceland so no tears though.

I have a big group of ‘Awesome Campers’ to take out next week plus I was mad keen to try out my recently purchased hammock. All that plus some gorgeous weather made heading to the woods a no-brainer. 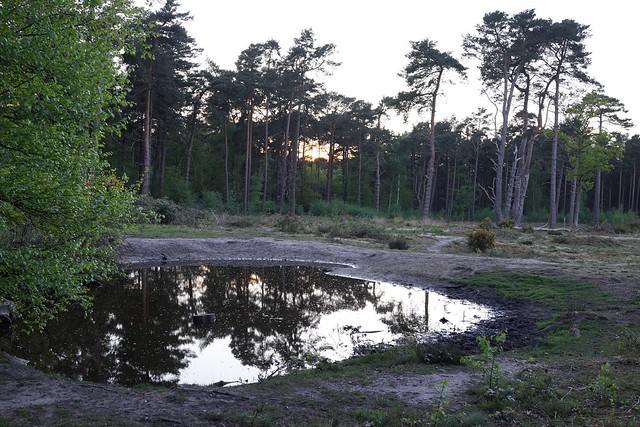 As planned I got to Oxshott at just after 8pm and headed into the wood to have a scout around while I still had a bit of light. Even though the weather was perfect I only saw one small group of people, amazing really. 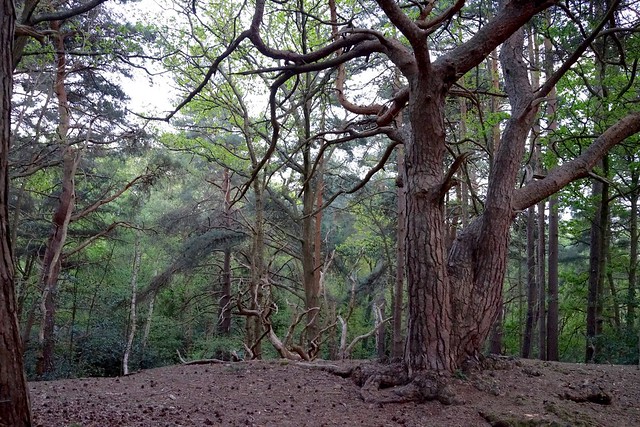 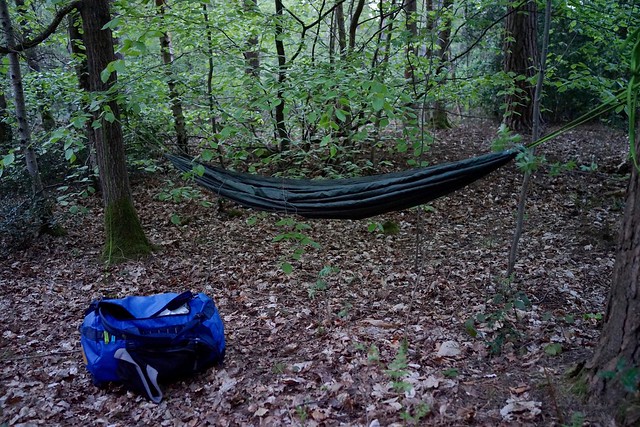 Once I’d had a pleasant look around the wood it was time to find a spot for myself to settle down in. This is the time when I find that I get all nervous. I really want to find somewhere out of the way and ideally hidden from view. It is not helped by wanting to tie a hammock between two trees rather than hole up behind a shrub out of the way. I eventually found somewhere in the middle of the wood and as much out of the way as I could find. 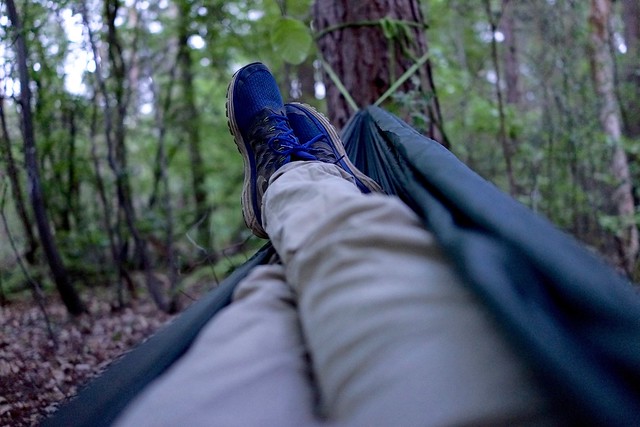 Slinging the hammock really does take just a minute , something I find quite amazing. I then broke out a mini bottle of wine and a travel pillow and, well, lay back and just relaxed as the last rays of the sun filtered through the trees. Hammocks feel quite decadent, especially if booze is present.

After it was dark I got my mummy style sleeping bag set up and I was all snug very quickly. What I didn’t do, however, as it was fairly warm was to put an insulated mat underneath. I regretted this later in the evening as I did get a bit cold. 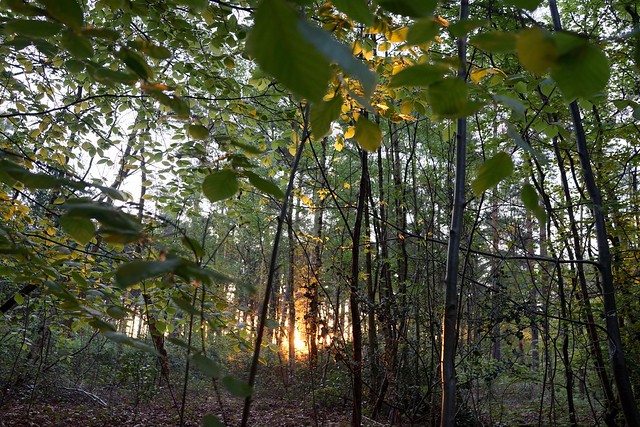 I woke up in the morning to a some lovely dawn light through the trees. I was tempted just to lounge about for a while, partly because it was just so comfy but also because I had ages till the morning train left. I was also slightly anxious not to be surprised by an enthusiastic dog walker so got up and enjoyed the awesome morning light. 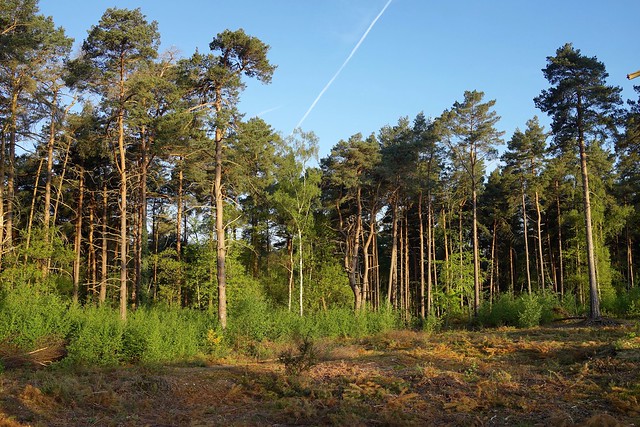 I packed up and then went for a bit of a wander around the wood and being a Sunday I didn’t see anyone, even dog walkers till well after 7am. I had plenty of time to hang out in the sunshine as the first train wasn’t until 0813.

This was a fantastic introduction to hammocking and it was great to get my 5th #microadventure of the year. #16in16 campouts is still on the cards. 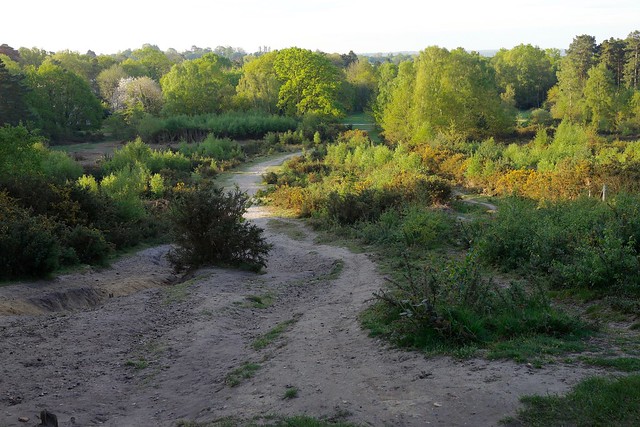 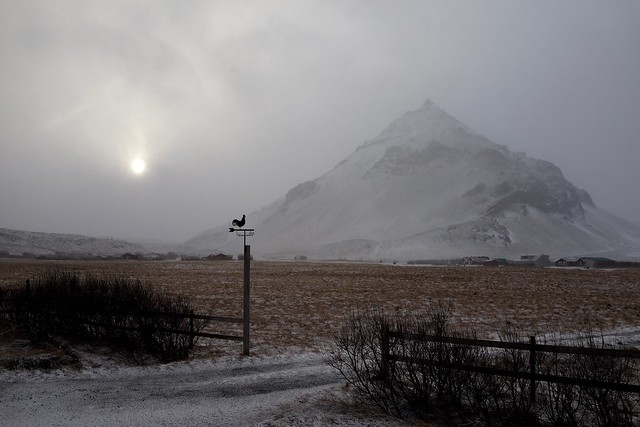 It was a bit murky this morning. Luckily Iceland still looks amazing in the murk and it had cleared up to some wonderful sunshine by the time we were on our way. We had decided to drive around to Grundarfjörður (on the north shore of the Snaefellsnes Peninsular) and to stop on the way where it looked good.

It was a icy on the roads but the mountains looked amazing covered in fresh powder with blue skies behind them. 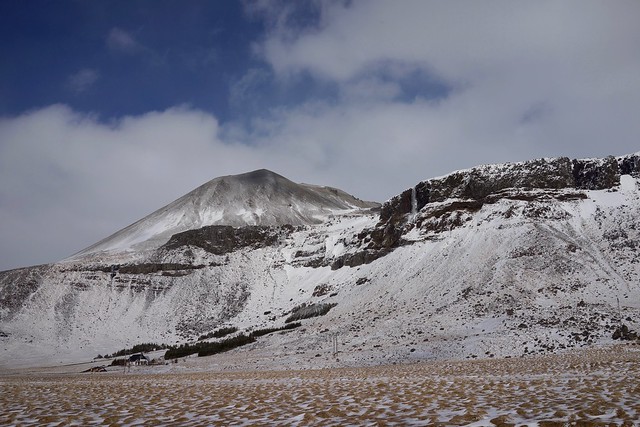 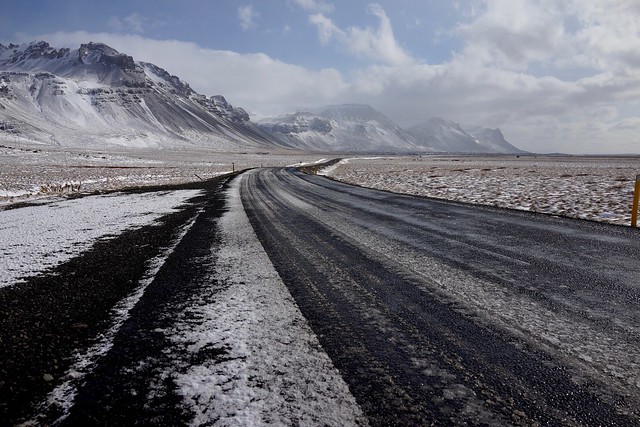 Our main challenge on the day was working out how to fuel up the car (in the UK we are not used to using a card at the pump). We stopped in the pretty town of Stykkisholmur. In our original plan we were going to head over to the Westfjords on the ferry from here, however, the weather was going to get a lot worse the next day and we HAD to make it back to Reykjavik. 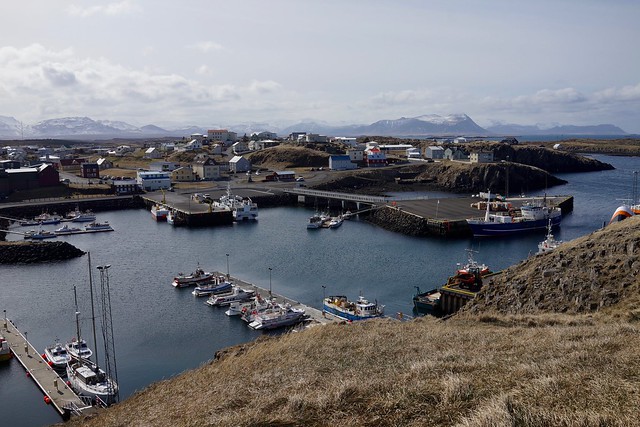 Stykkisholmur itself looked wonderful in the sunshine, especially from the little hill on the far side of the harbour where we could see Flatey (an island) and the Westfjords themselves. There was also a very cute little lighthouse. You don’t necessarily see it from the pictures but it was about 1 or 2 degrees C and really cold. 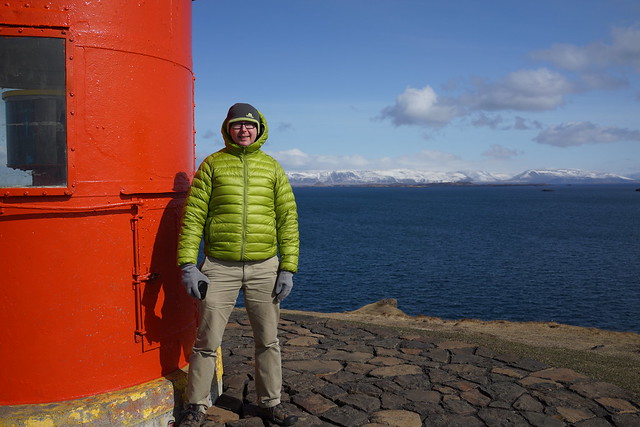 We had lunch here (the seafood is usually very reliable in Iceland and the soup particularly so) but were disappointed to find the Volcano Museum shut. There was some debate about whether to try the local swimming pool that had been recommended but as our Airbnb was supposed to have a hot tub, we passed on it this time.

We then headed out of town, west towards Grundarfjörður admiring the majestic mountains. Over the last few days we’ve frequently passed little side roads but generally just ignored them. This time Gil asked me to stop (it was my turn at the wheel) and suggested that we investigate. I’m glad that we did as the road (more a track) took us up into the foothills and some snow patches. 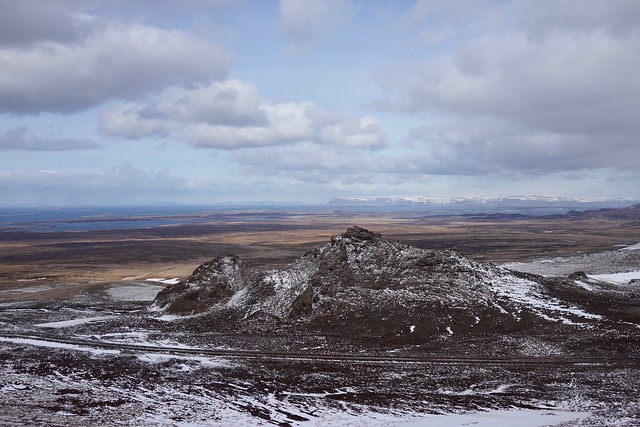 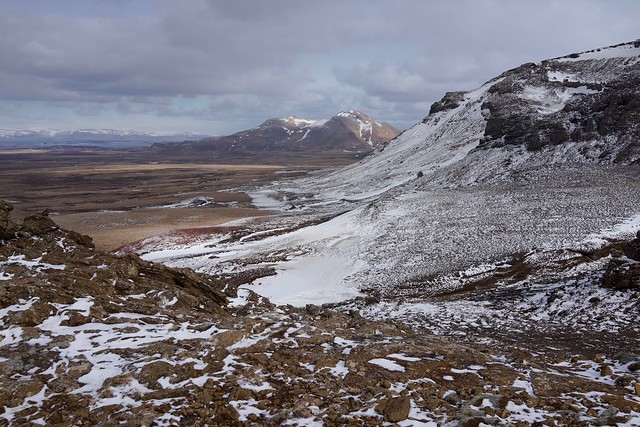 Despite my worries about injuring my already dodgy knee I climbed a couple of the small hills in the valley. Even the small hill was steep and slippery but the views were terrific and well worth it. It was hard to think how this day was going to get better. But it did. 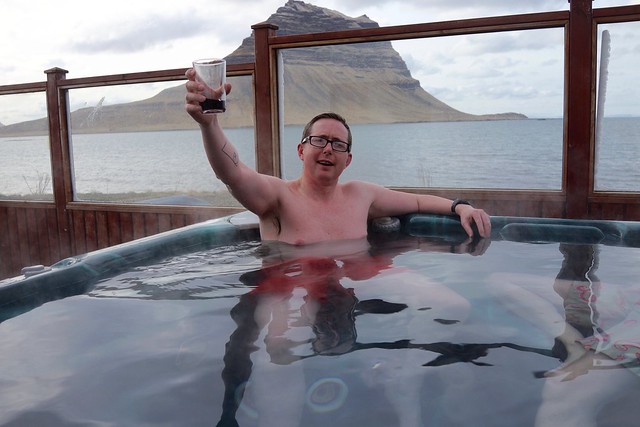 The Airbnb that we stayed in had a hot tub that looks out of the magnificent Kirkjufell. As soon as we could we broke open the wine, got in and essentially had a bath with a view. Honestly one of the more surreal experiences of my life. Iceland really feels like a magical place. I can almost believe in the elves and trolls too. Almost. 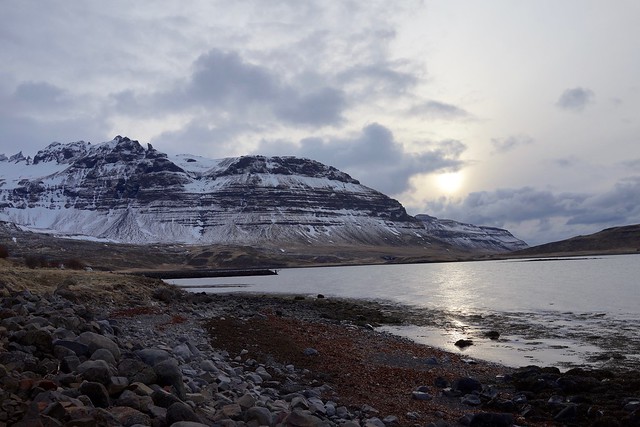 On our last day we took a very leisurely route back to the Keflavik area taking in a few extra sights. 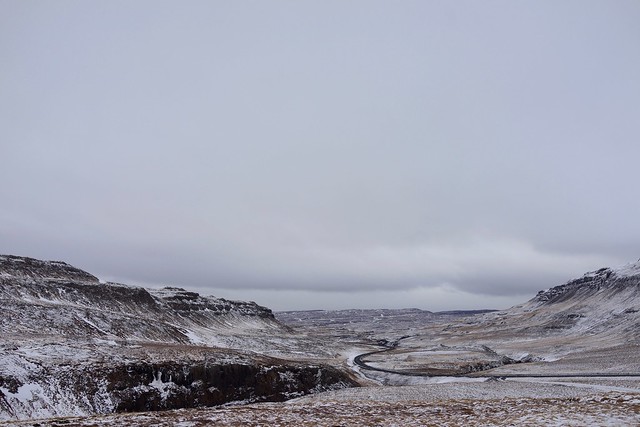 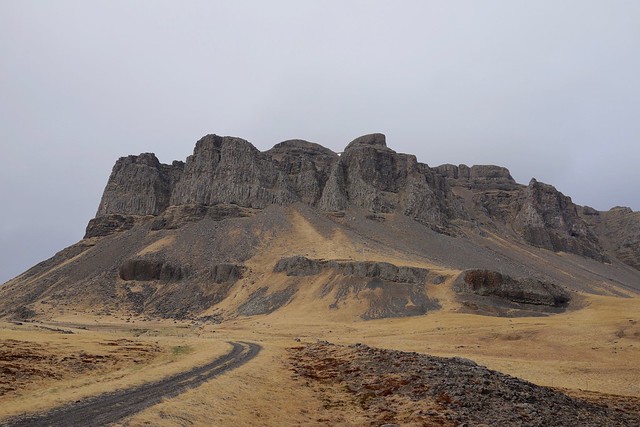 We had booked a final Airbnb in Vogar near the airport. It turned out to be a lovely little house and Iceland even gave us a beautiful sunset as a last goodbye. I’ll be honest, I was hoping for some northern lights as we were in a good spot for it, however, we weren’t that lucky. 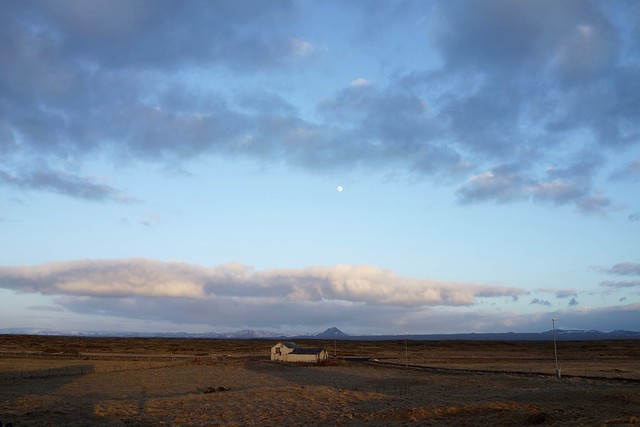 We only had a few days for an excursion but (with some luck from the weather) we’d managed to have a brilliant and memorable trip. Huge thanks to Gil and Nicola for being superb travel companions.