Having ‘conquered’ a walk across London from east to west (Part 1, part 2, part 3) it was time to tackle North to South. London is a lot shorter than it is wide and I reckoned that this route could be done in just two days of walking. I was also really fortunate that my friends Nickos and David were keen to join me on the challenge. 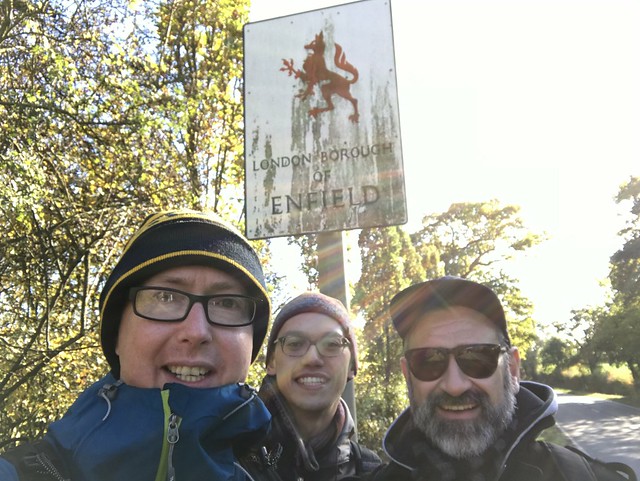 It turns out that the most northerly part of Greater London is a lonely country road just inside the M25 near Crews Hill station in Enfield. This required walking along an unpaved verge for a kilometer or so. The completest in me meant that we had to make the border. My companions were less fussed. At least there was a sign to mark the start. It was exciting that almost from the start we could see the half-way point of the Shard in central London. 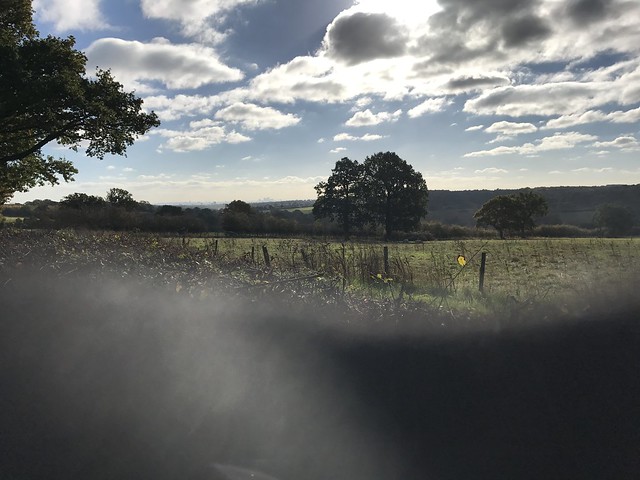 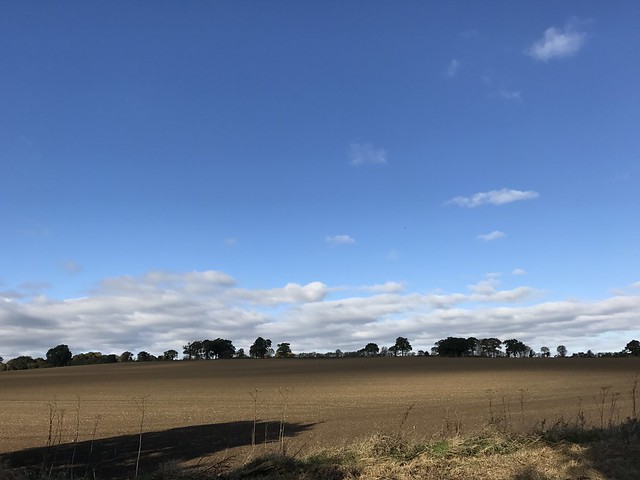 The morning was quite cold but very sunny and it was a pretty lovely walk alongside fields and trees. It wasn’t too long before we found suburbia though in the form of Enfield town. There some very nice parks though and my old friend Google maps took us through as many as possible. 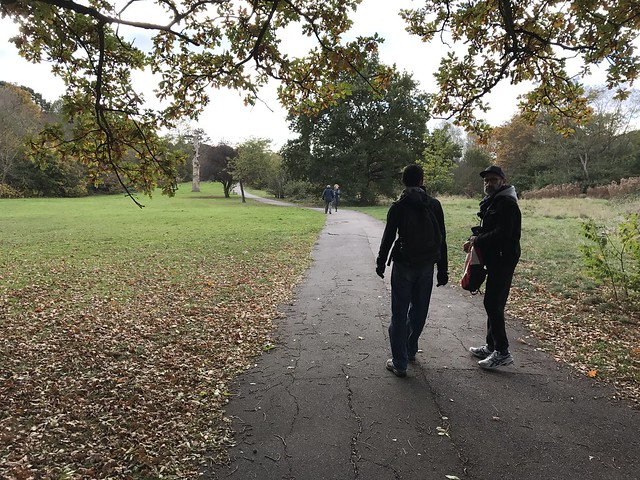 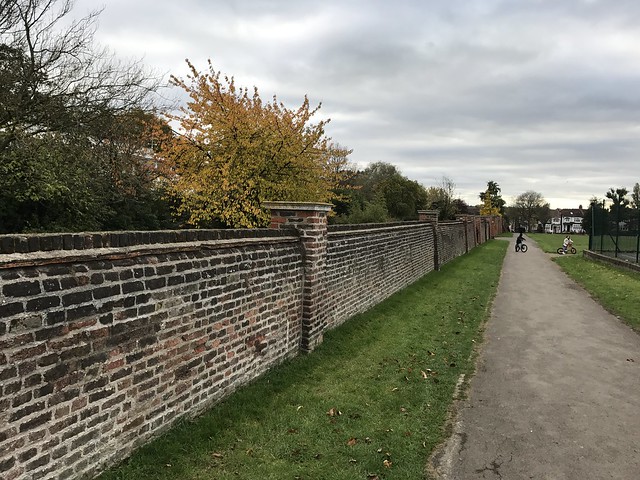 I did take us slightly away from the most direct route firstly by insisting on walking by a street near Bounds Green that I used to live in and second by climbing up to Alexandra palace. The views from here are magnificent and the ‘palace’ itself is still pretty great. 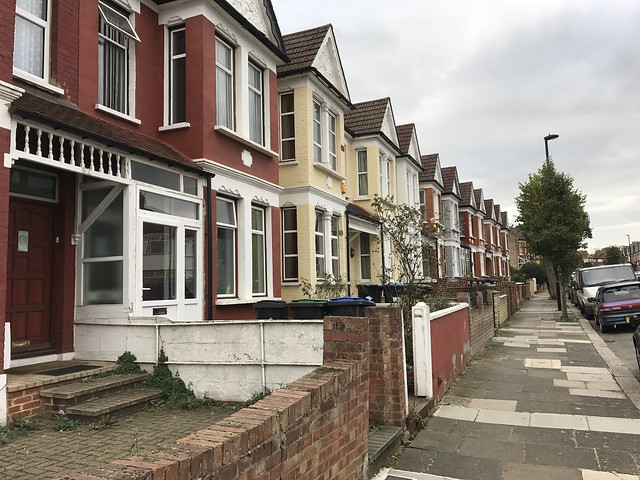 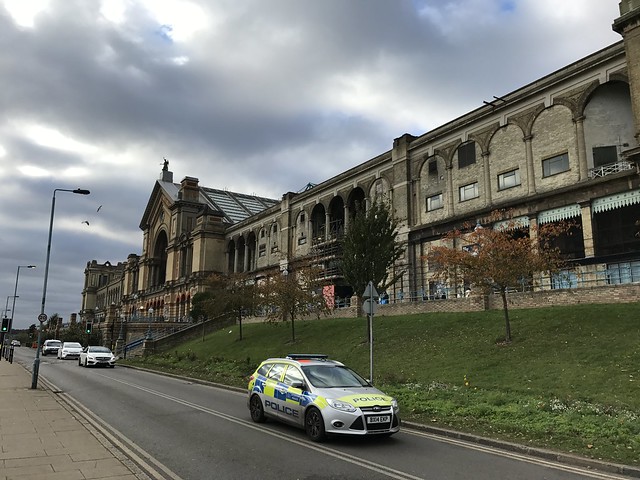 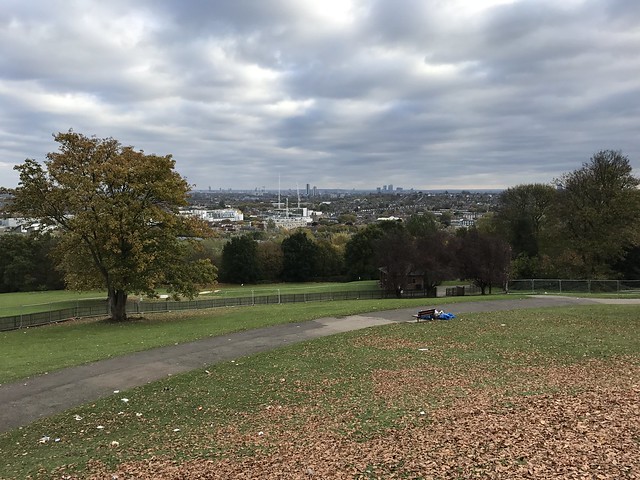 By this point, however, the beautiful sunshine gave way to threatening clouds. It wouldn’t be long before it turned into drizzle and finally a proper downpour. Good old British weather.

The revelation of the walk was quite how nice Crouch end is, a place that none of us had been to (at least in many years). This is one of the best things about walking round your home town. Discovering or re-discovering places that life hasn’t taken you to. 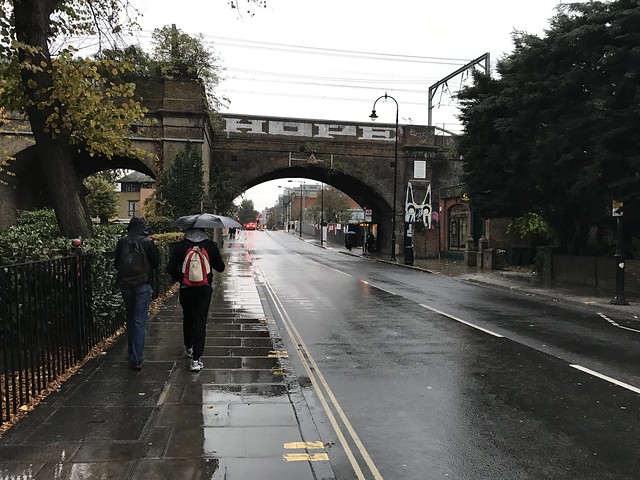 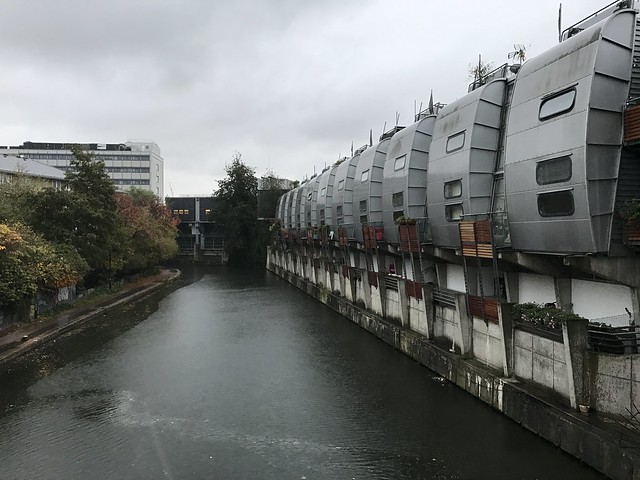 It’s fair to say that once the rain got heavy the walk was a little bit of a trial and we didn’t dawdle. Also the central London Sunday shoppers were out and making fast walking a bit tricky too. When will there be a ‘locals lane’ on London pavements? 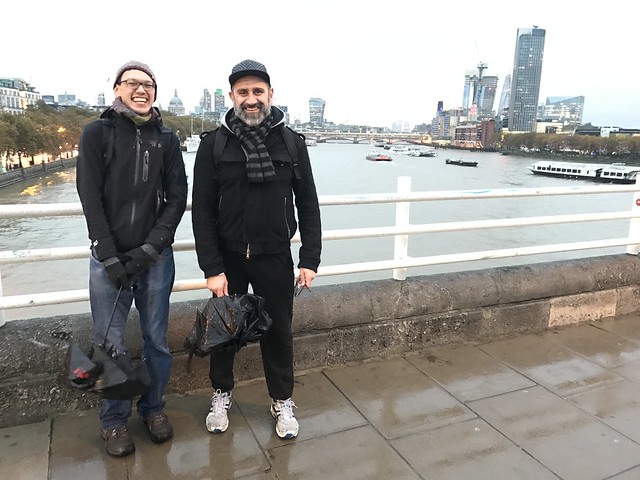 We ended our day on Waterloo Bridge, the northern part of our walk completed. Damp but undefeated we celebrated with a beer and a burger. Yay!

The weather couldn’t have been better for the second part of this walk (about three weeks later) – a crisp cold blue sky day. It may have been cold but it was glorious. We started off from Waterloo bridge and made our way down the river to Vauxhall. 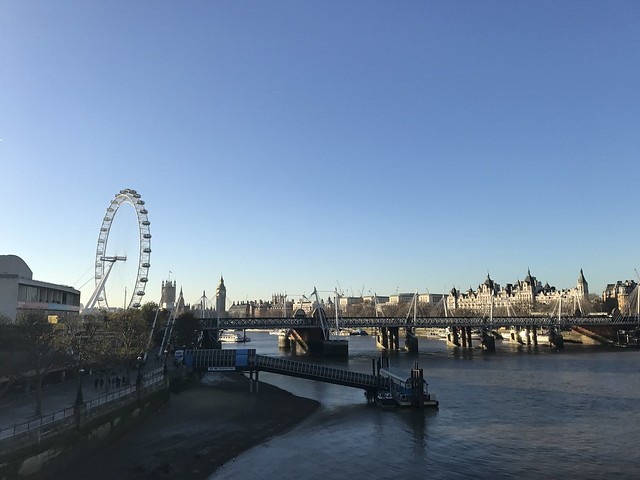 Leaving the river we passed through Stockwell and made it to Tooting Bec Common where we stopped for some excellent brownie (thanks David). 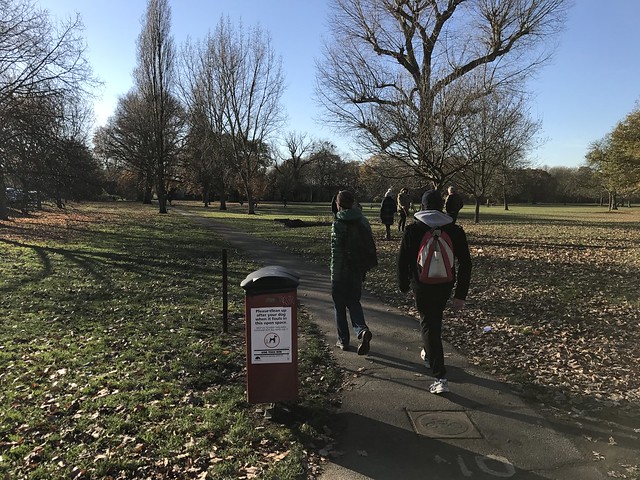 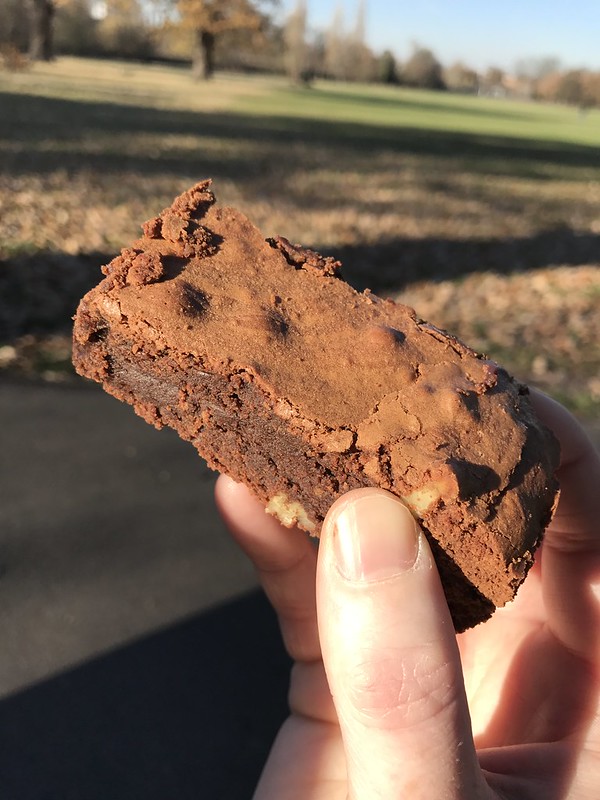 From here our journey took us through the unremarkable suburbs of Mitcham and then Carshalton and Wallingford. It included passing the aromatic Beddington sewage works. 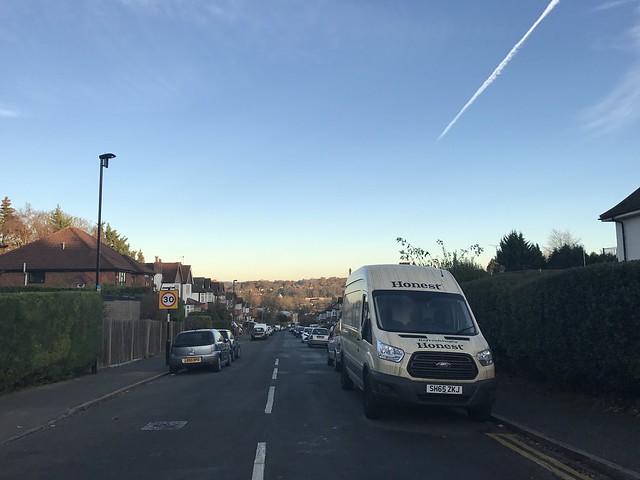 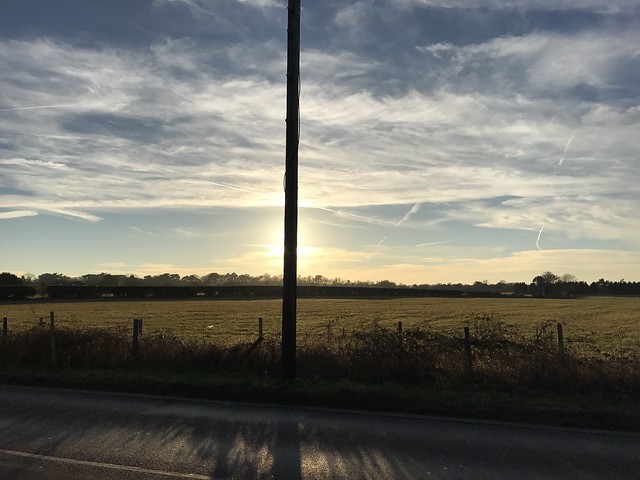 With daylight starting to go we finally arrived in Coulsden, the last bit of town before our destination. Farthing down would have been a superb end to the trip. It is a pretty bit of heath with lovely views into happy Valley and beyond. We even got a majestic sunset. 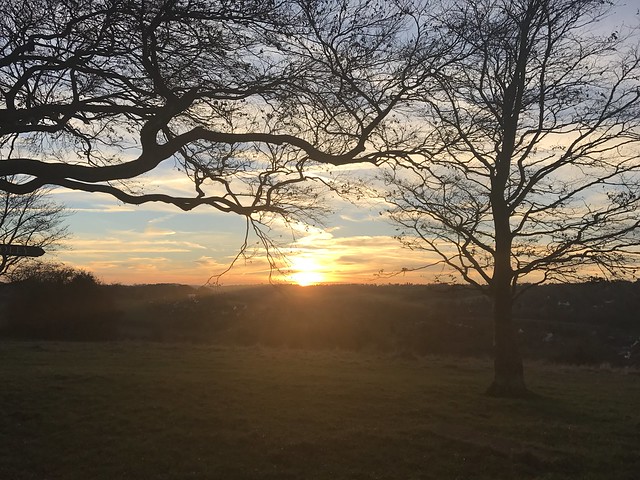 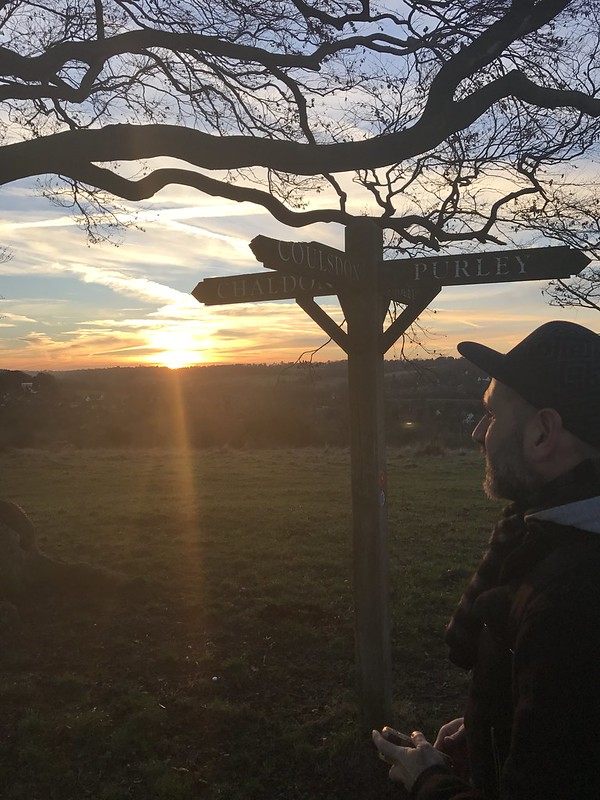 Sadly, however, the edge of Greater London was a further 1.5 km down a small unpaved lane. I was checking our position on my Ordnance Survey app on my phone which eventually told us we were there. We had made it. We had a nip of whiskey and a celebratory photo. 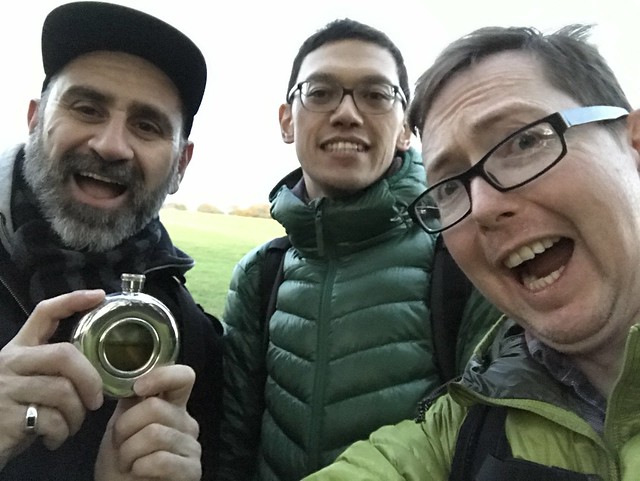 All that remained was to walk several miles back up the lane and across farthing down to Coulsdon where we could have a drink and a curry.

A huge thanks to my companions David and Nickos who were brilliant company. Even when it rained or I made them walk to the middle of nowhere ‘because that’s what the map says’.

This was a really nice project that I’d recommend.

Why do I like to go to the top of mountains? Why do I like to sleep outdoors on a winter night? Why cycle 200 miles visiting 12 castles? Is it because I love these things for themselves or is it because I can brag about them on facebook and instagram? Is success measured by how I felt or by how many ‘likes’ I get?

The last question has been haunting me a little bit lately. It is a sign of modern times that we (or at least I) judge myself and others at least partially on the ‘cool’ stuff that they do and then share. I’m not proud of this.

I’ve been telling myself that I really do love the outdoors for the joy that it brings to my heart and that I don’t need any recognition. Or do I?

The test is to think up something that I think is super cool and then do it without posting a thing about it. Don’t say where I’ve gone, don’t post any pictures and don’t blog about it. Simple right? Well, I’ve planned a mini trip and if I was going to put my money where my mouth is, this is a great opportunity. The problem, and why I’ve written this post at all is that when it has come to the crunch, I find myself being pretty disappointed not to be able shout about it. What have I become?

It has made me all the more determined to try it out anyway.