When I was twenty years old, after only a little bit of training, I took part in the BHF London to Brighton cycle ride. It was a great experience but the thing that has stuck with me is that I walked, rather than cycled, up the majority of Ditchling Beacon. I vowed that one day I’d return for a re-match and defeat my nemesis! This was that day. Would I make it or would it be another defeat? 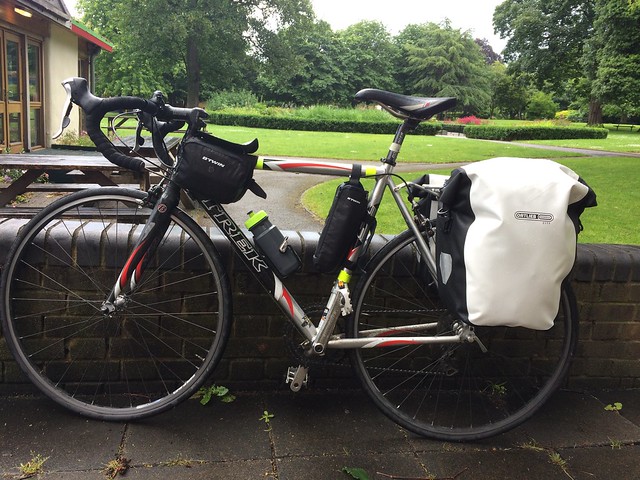 London to Sutton
With only a week’s notice I asked on Facebook if anyone wanted to join me in my mad-cap scheme to cycle to Ditchling plus climb the beacon and then overnight bivvy there. Luckily for me the (Cam triathlete) Fiona joined me for the cycle and (walking superstar) Astrid planned to meet us there for the campout. 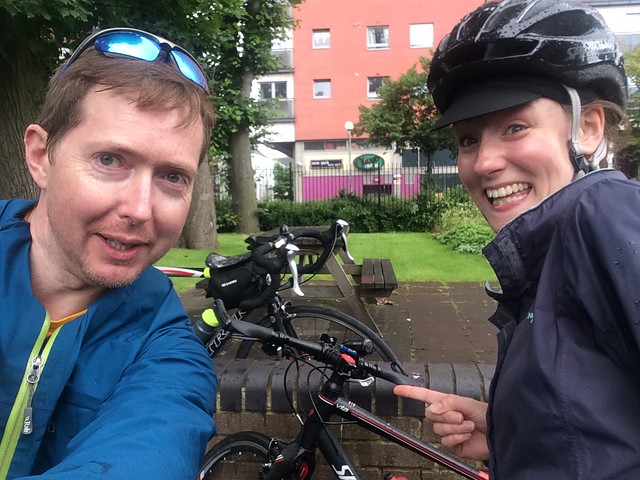 I set off from Sydenham in beautiful sunshine worrying that I might get sunburnt. About half an hour into my cycle the heaven’s opened and it torrentially rained. I stubbornly kept my sunglasses on. Fiona and I had agreed to meet in Sutton as the nearest place between us. We even shot a little video: 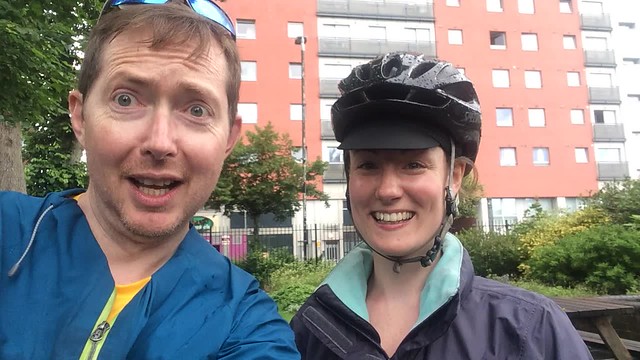 Sutton to Crawley
The sunshine and showers routine was something that continued for most of the afternoon. At least it was clear and bright when we had lunch and also when we found this delightful lavender field. 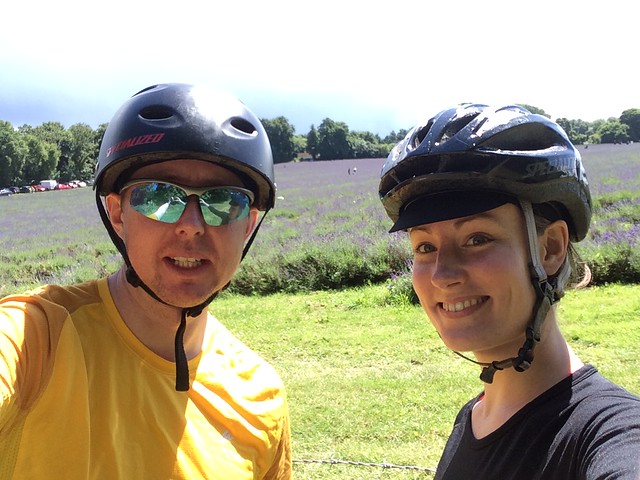 The miles rolled by and we crossed the M25 and I was feeling pretty good. it was here that my lack of route preparation started to come in to play. I naively just expected that we could follow Google maps bike route to our destination. Bad call. What I had sort of known before but hadn’t thought about is that Google maps takes you down any path and bridleway it sees. This could be fun if we A) Had mountain bikes, B) Had all the time in the world. We had neither.

The real kicker was when I got pretty much lost in the suburbs of Crawley with Google maps directing us down little hidden alleyways. It was very frustrating! This was, therefore, the absolute perfect time to also get a puncture. Especially as I’d not packed a spare tube (always carry a spare tube folks!). I did have a puncture repair kit but very little experience of actually using one. Luckily Fiona (my hero) was brilliantly patient, both with the navigation and my panic over the burst tire. My first field repair held! Go us! 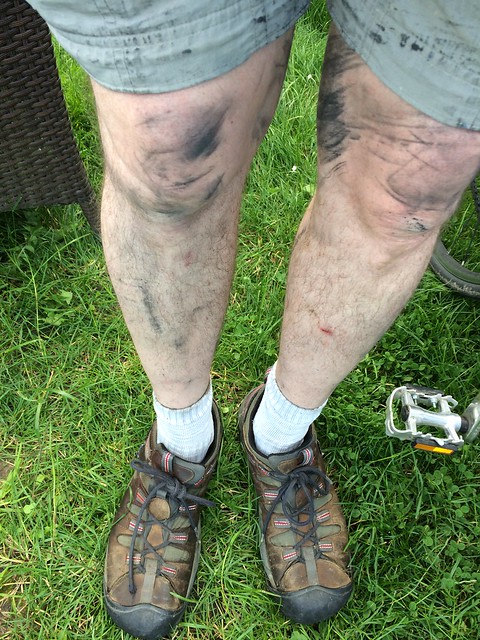 My knees were looking even less pretty than normal after dealing with the wheel. We eventually did get out of Crawley.

Crawley to Ditchling
From here on we at least managed to not get lost any more plus the sun was out and the rain all gone. Tiredness, however, was starting to creep in and climbing the many rolling hills was getting a bit tough now. We did revive ourselves a bit with some enormous gourmet burgers (and a shandy for me) at a pub before finishing the final 12 miles. 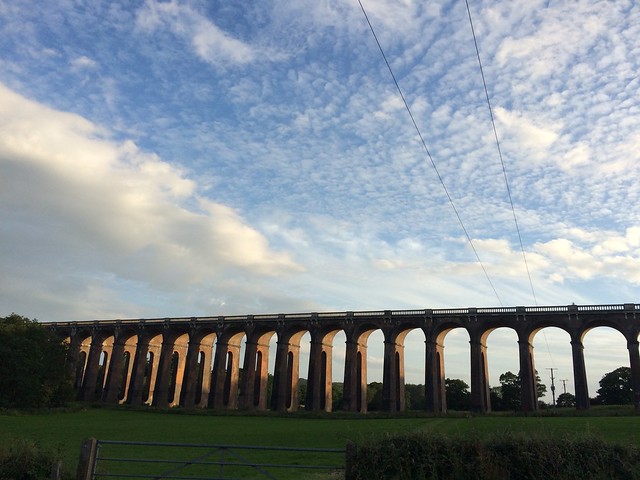 We passed this wonderful viaduct and made our way through Haywards Heath, the last significant town of the day. It was getting late by now and it seemed odd seeing lots of folk out drinking and enjoying themselves on a Saturday night while we toiled on our bikes. 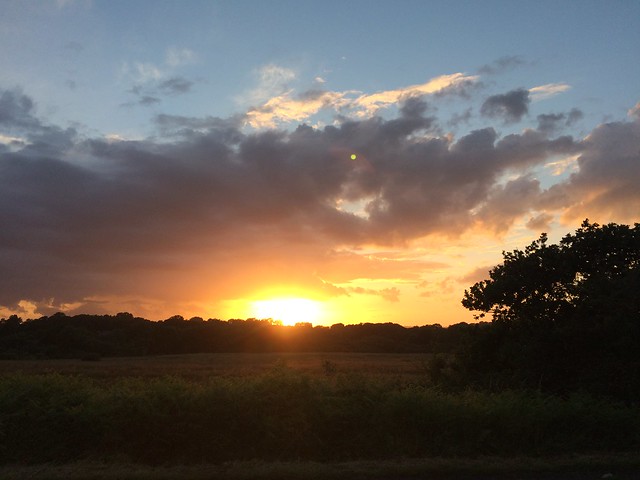 My original aim was to get to the beacon and watch the sun go down, however, our various delays meant I got this ‘sundowner’ en route.

Coming up to the beacon itself I had to decide if I was going to ‘go for it’ or not. My legs were a tiny bit sore and my lower back actually quite painful but I thought I had to at least try. This was a dragon I really wanted to slay.

The beacon looms menacingly from quite a ways out and seems impossible from the bottom but as you climb, the summit is never in view so there is no way to gauge the end. I just kept chugging along, knowing it would be quite painful and there was at least one occasion when I thought I would have to walk. I’m so pleased I didn’t. 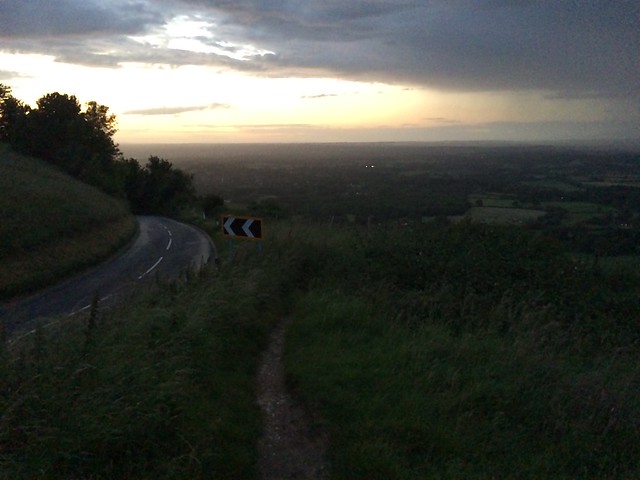 Going round that final bend and seeing the South Downs Way sign I could have cried with joy! I had done it. Finally. This was a story over 23 years in the making and now it was over. I honestly haven’t been this pleased with myself in a very long time and it feels really good.

An Awesome Campout
At the top of the beacon we met up with Astrid, who was out training for some more ultra walking events (she had walked 30 miles that day). After some hugs, whoops (from me) and smiles we set up our bivvy stuff. There seemed a chance of rain so we rigged some bashers up too. Astrid came good with a pole and some pegs and best of all some beer (what a legend).

This is what it’s all about, sharing a wonderfully fulfilling day with some friends with a view and a beer. There was even some fireworks on the horizon although I suspect it may not have been celebrating our ride.

Tired but happy we went to sleep. I was woken at 0430 by the most amazing sunrise and felt blessed to be here. 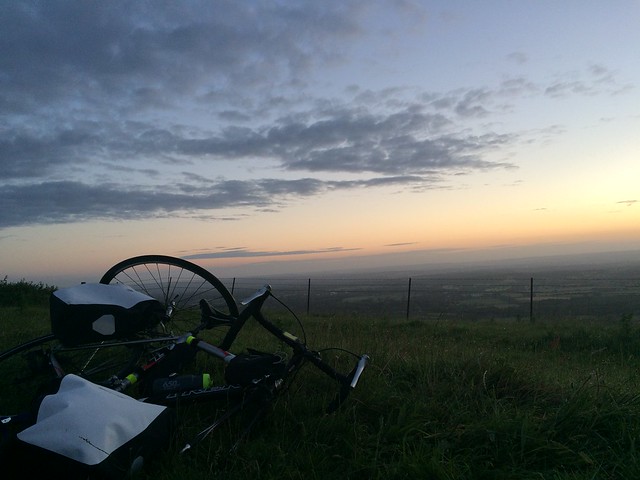 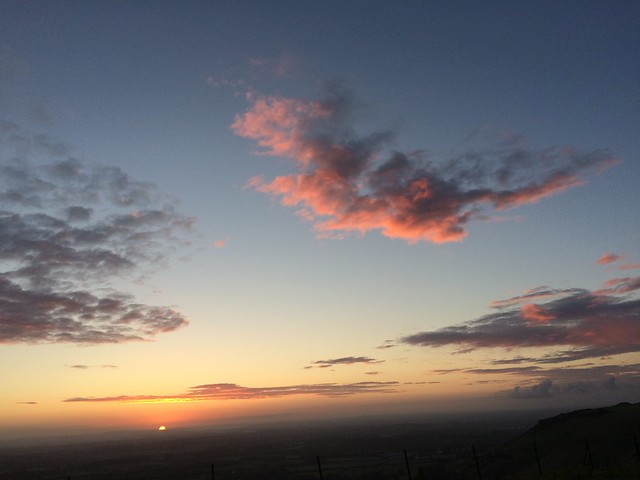 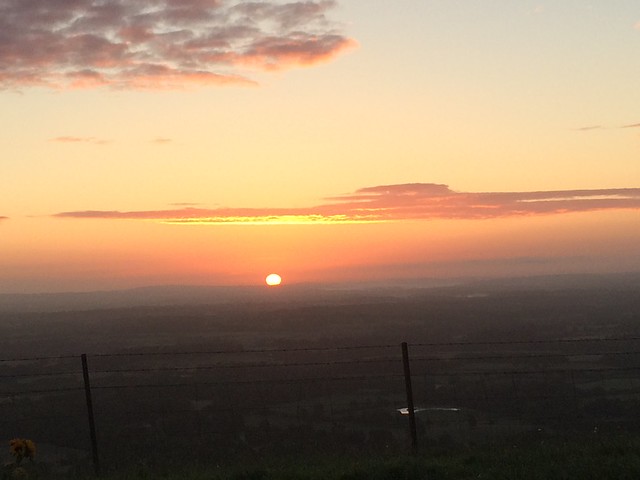 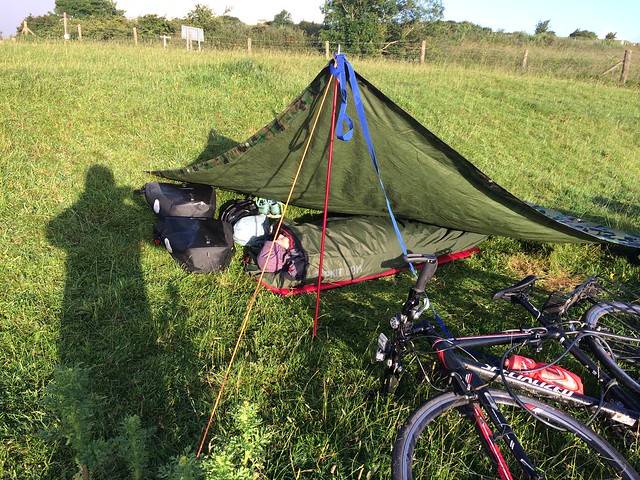 After a quick brew and a couple of hot cross buns we packed up and went our separate ways. Fiona had picked up a bit of a knee injury and understandably didn’t want to risk it getting worse. Astrid had another long training day to do and i thought I’d try and cycle home. We seem pretty darn happy: 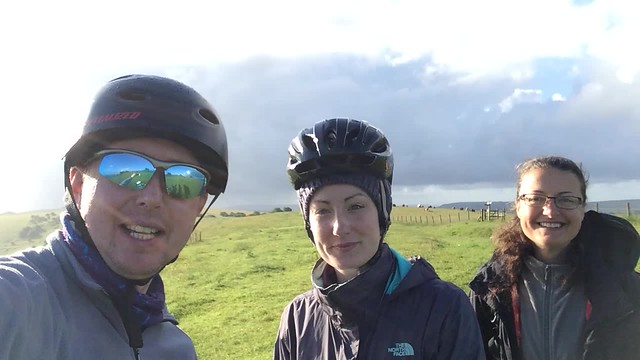 Ditchling to Home
I set off at 0700, starting with a fast freewheel back down the road i’d laboured up so painfully the night before. The sun was bright and it was good to have the wind in my face.

I feel that I’d learned a few lessons from yesterday with regard to route planning and this time I did some way points rather than the whole route.The first major one was Turner’s Hill in which I stopped for a breather and some refreshment courtesy of the convenience store. My second breakfast consisted of a pint of milk, a carton of coconut milk and a snickers. I take nutrition seriously! What I didn’t get was any water as I assumed i’d be able to pick some up on the way. A foolish schoolboy error that was. 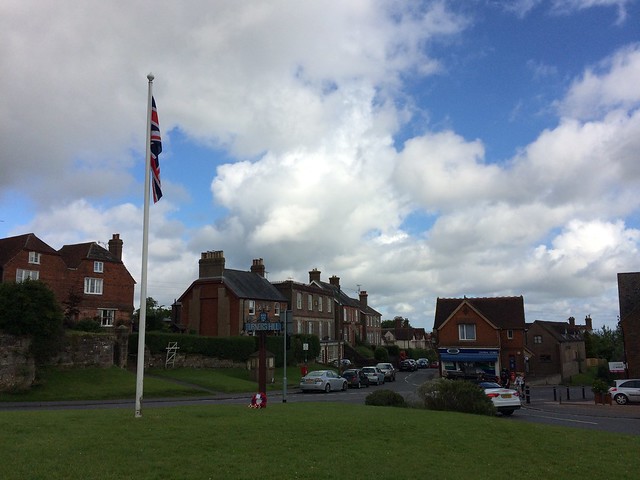 Carrying on, I skirted East Grinstead and then hit the most direct way home – the A22. This is not a great cycling road in that the cars had to pull out to overtake me and I know I held a few of them up as several hooted me and one nice man called me a c**t. What I did do was make good time.

Broken by Marden Park
I was getting very tired now and more than anything, my back was killing me and I found I was stopping every 5 miles or so just to have a stretch. What almost finished me off though was when Google maps took me off the A22 near Woldingham and sent me up to Marden Park. This, it turned out, was up an incredibly steep hill, one I thought was much harder than Ditchling and one I certainly didn’t finish cycling up. I felt a little defeated by having to push after my ‘heroics’ yesterday. I feel better about it now.

The Finish
After the north downs were done it was mostly downhill or flat and I kind of coasted home. I was a tiny bit sunburnt, a tiny bit saddle sore, my back was killing me but I felt like a million bucks. The cycle from Ditchling had only taken me 5 hours which seemed pretty quick.

Cycling for two days straight, 60 odd miles the first day and 50 or so the second is a huge accomplishment for me. I can’t say that I feel very able to do a third day of 50 miles but this has still given me a lot of confidence. I’d like to do a 4-5 day cycle later in the summer and this actually feels pretty doable now.

When you smash through one barrier, you line up the next one!