“There are only 60 places left and you have just a few days to find a partner and register” said one of my ‘Project Awesome‘ friends. The ‘OMM’ has been on my wish-list for years but due to injury or other commitments i’d never done it. This was my chance if only I could find a partner!

Some would pick an OMM race partner on fitness or maybe navigation skills. My priority was to find someone who would keep their sense of humour when cold, wet and lost – conditions that seem inevitable in the race. My good friend Michael was open to some persistent persuasion and joined me! 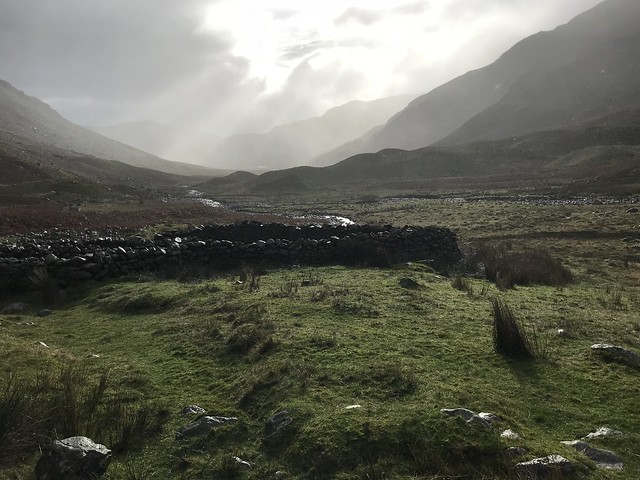 What is the OMM?
The Original Mountain Marathon is a 2 day self-supported orienteering race hosted somewhere in the rugged areas of the UK. This year the setting was beautiful Langdale in Cumbria. There are many different categories, including the ‘Elite’ 85km linear race. I signed up for the ‘easy’ Short Score which is a timed event that turns out to be quite tactical. Five hours on day one and 4 hours on day two – score as many points as you can from various checkpoints scattered around the hills but incur penalties for running over your time!

Kit
Considerable thought, effort and expense can go into acquiring and packing the gear. There is a long(ish) list of mandatory items that you need to bring including a proper tent and stove and emergency rations. The goal for many competitors is to pack the lightest (and smallest) possible items even if this means they might be cold and uncomfortable. I saw a lot of bubble wrap that supposedly replaces a proper sleeping mat?! 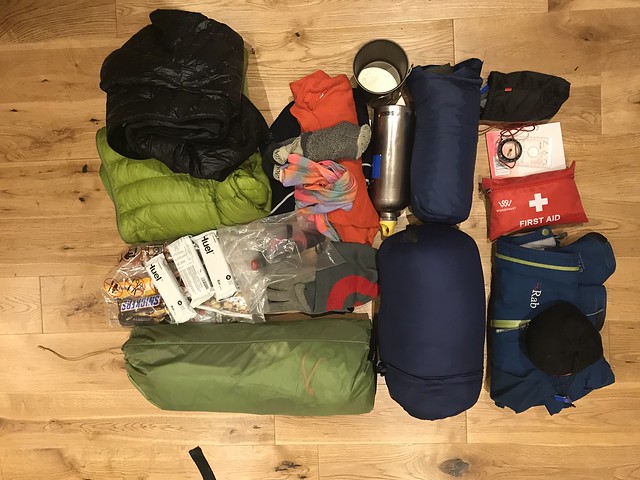 My aim was to not buy any new kit. My bag was one of the biggest that I saw!

The Start
After a little bit of an epic drive with the wonderful Rebecca, Charlotte and Leanne we arrived late on the Friday night, pitched our tent and then enjoyed the ‘Pasta party’ and a beer. This was everyone’s first OMM and there were a few worried looking faces (mine included). Had a decent night’s sleep myself though despite it being fairly blowy. 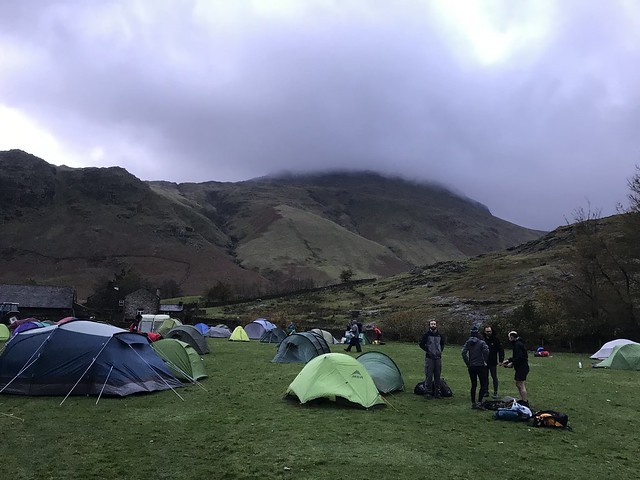 My partner Michael and I had a relatively late start (10.30) so we mainly watched all our friends and most other competitors head off before us. The weather looked pretty grim as we hit the start line, a bit of light rain and menacing cloud on the hilltops. The rainbow was very welcome. 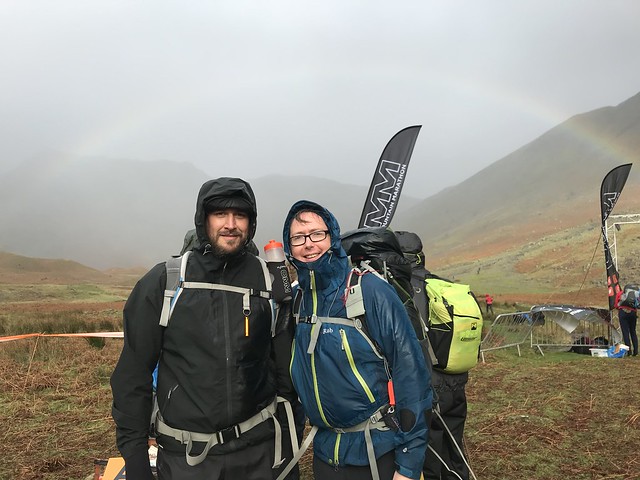 Race – day one
At the start line we ‘dibbed’ our timing chip, got given our map (one each) and we were off! Well, to be exact we knelt down by a rock and tried to plan what the hell we were doing for 5 minutes. A sketchy plan made we headed off and quickly hit a lung-bursting ascent and the further we climbed the more inclement the weather became. 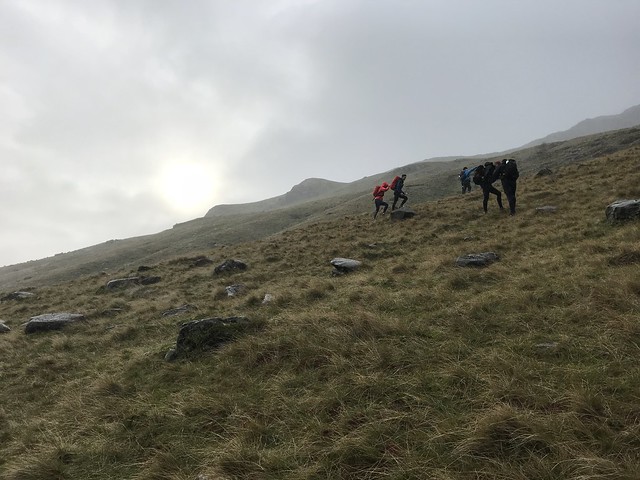 We quickly learnt that the organisers were not going to give us an easy time finding the individual checkpoints. They were generally in a dip or crevice and because the maps were 1:40000 we could only really identify a general area. The thick (very atmospheric) mist only added to the challenge. What was a help was seeing a gaggle of fellow racers heading for areas off the path! 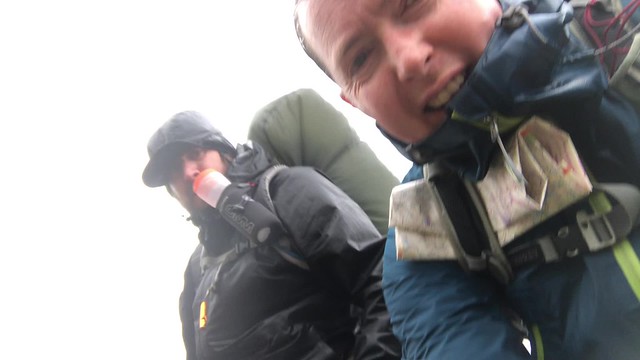 At the top of the hills the wind and rain was ferocious and we were soaked through before midday. A few hours in Michael started to develop some cramps that only seemed to get worse as the day went on. It was also becoming clear that we were unlikely to get to the finish within 5 hours. 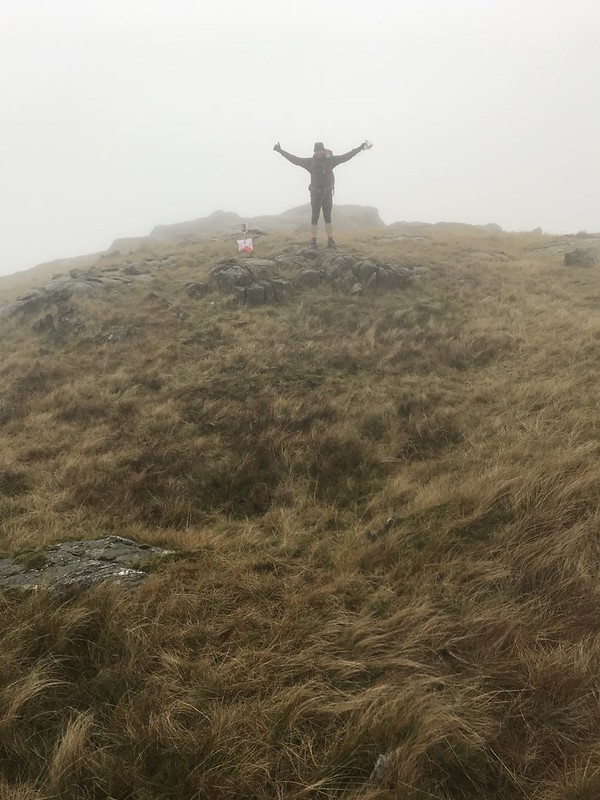 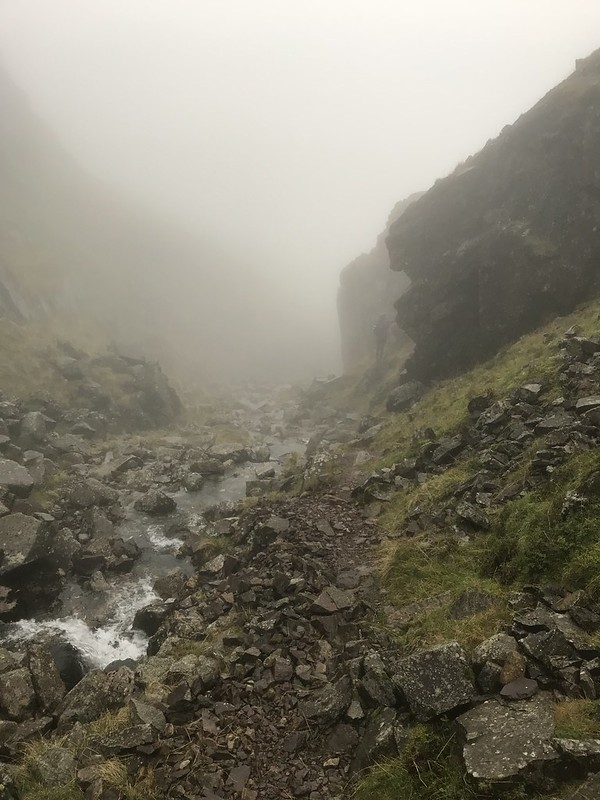 It is notable that the ground conditions were incredibly boggy and that wet feet was a feature of the entire day. I wore trail running shoes (a good decision) and was lucky that I didn’t suffer any blisters. I did wonder a bit how long it takes to get trench foot? 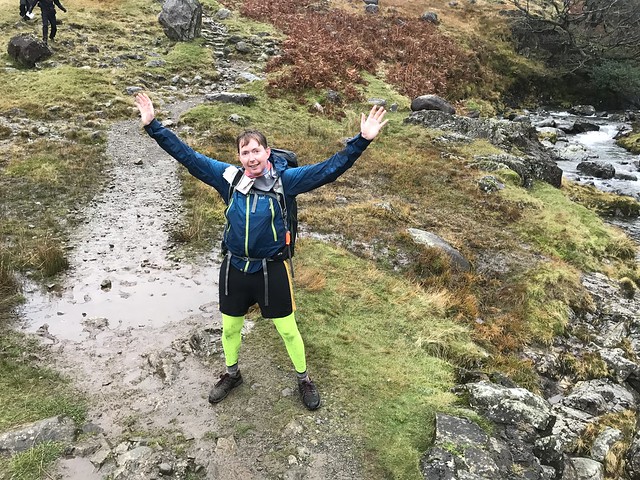 We eventually crawled into the overnight camp over an hour late to find that we had gained 150 points but been deducted 128. A bit of a blow! 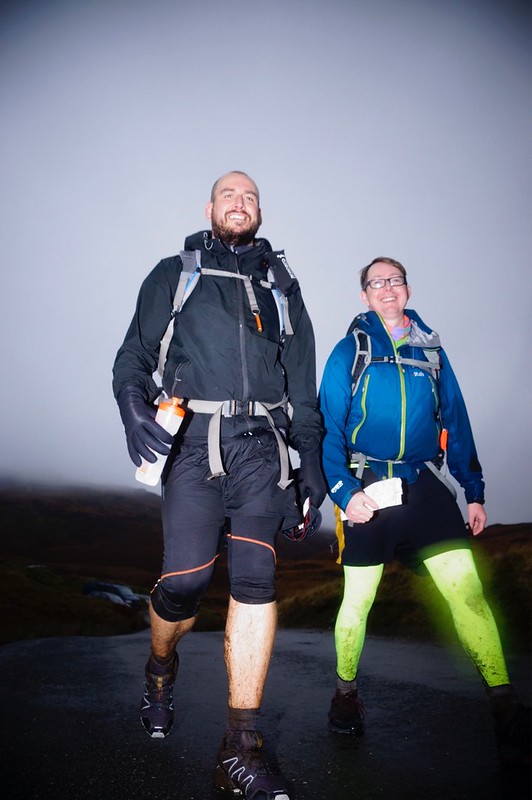 The Overnight Camp
In what seems like an act of minor cruelty the designated overnight camp was basically a bog with most of the dry bits being on a major slope. Michael and I managed to find some slim crevices to put our little one-man tents and try and sort ourselves out. A priority was to get some hot food down our neck which led me to panic slightly when Michael told me that he’d brought the wrong fire-starter for the stove! Luckily a friendly competitor lent us a lighter. 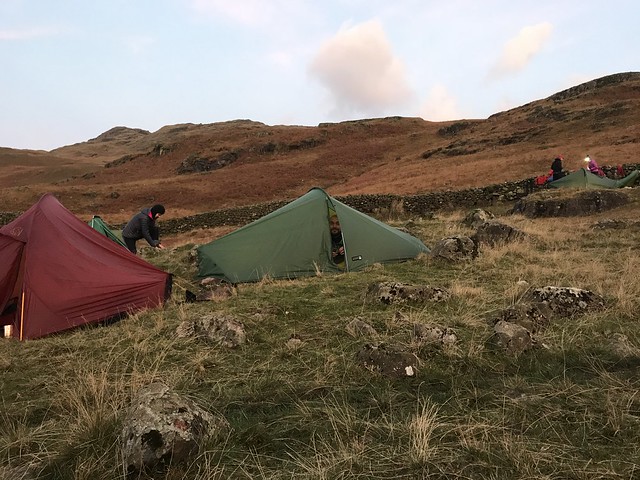 I made the controversial decision to just keep on my damp clothes and hope they dried out on me (fine as it turned out) while Michael laboriously took off his wet stuff and put on his dry stuff. This included some hilarious (to me) grunts, groans and yelps coming from his tent. By the time we’d eaten and warmed up it was about 1800, we were so tired though that we just got in our sleeping bags and snoozed or went to sleep. I have to say that my tent was snug and I was perfectly warm over night. It was a tad steamy for a bit as my clothes dried out. In the morning I did, however, still have to put on soaking wet and cold socks. Yuk. Michael, on the other hand, had to put on cold wet everything! Yikes. 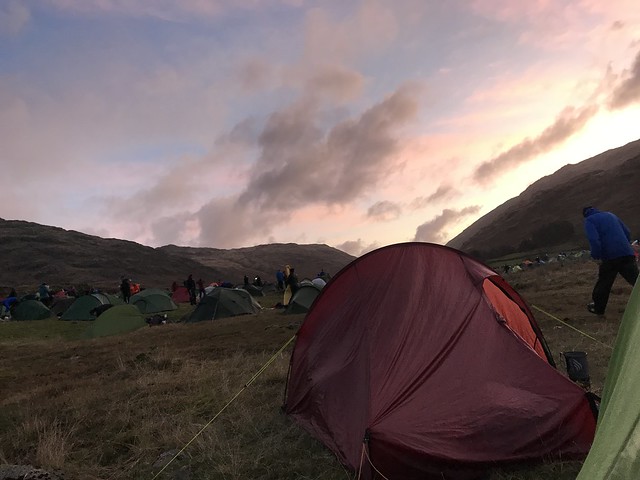 In contrast to day one, the morning was beautiful and clear, though cold. We had another late start time which meant that we had quite a bit of hanging around. In the end it meant that we were possibly the last competitors to cross the start line.

Race day two
Michael and I were fairly exhausted before we even set off and having learnt our lessons on the penalties of being late we decided to keep the plan simple today. Just get to the finish on time and don’t worry about racking up a basket of points. The race map told us that we could pick up 2-3 checkpoints without going out of our way too much. 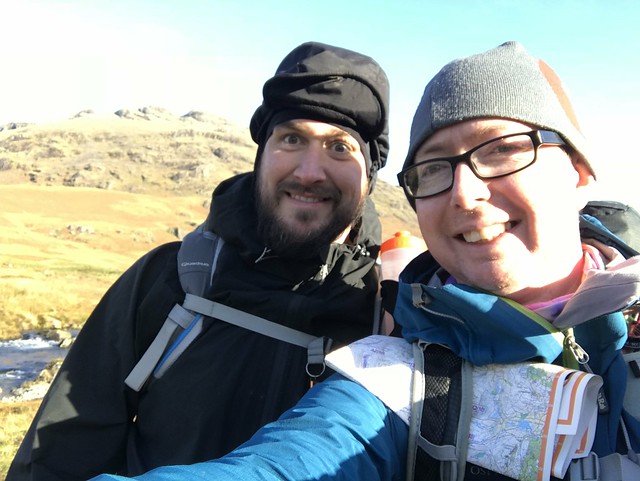 After a very short walk along the road between Hardknott and Wrynose passes we forded a stream and headed up the stiff climb of Cold Pike. With our tired legs, this was a bit of a tester and seemed to go on forever. The blue skies and clear views were gorgeous though and this was easily one of the clearest days I’ve ever had in the Lake District. 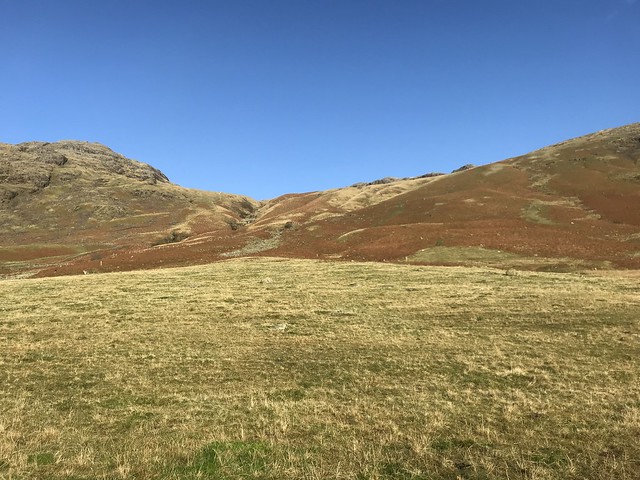 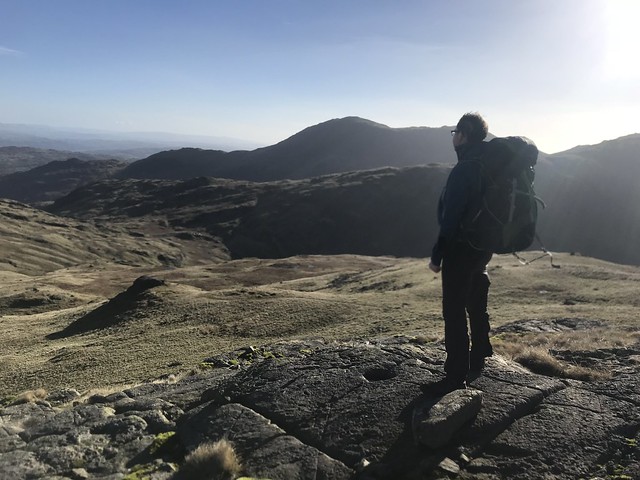 We spent what seemed like ages trying to find our first checkpoint and eventually gave up. This seemed particularly galling as the weather was clear and there seemed like few excuses. Damn sneaky organisers! To my utter surprise but complete delight what I did find was my wonderful work colleague Nicola who was out walking with her husband! A fantastic coincidence. 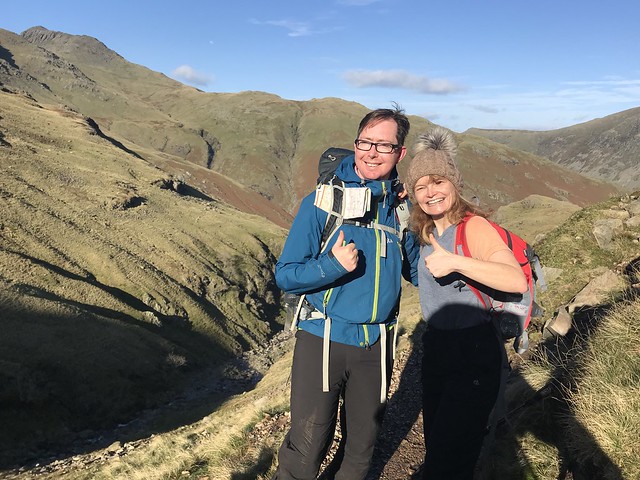 In the end we only completed two checkpoints on this day and came in nearly an hour early. We did manage to jog in the last half kilometre and ran triumphantly through the finish line. We did our last ‘dib’ with the timing chip and picked up the finishers badge.

You do get a cup of tea, ribena and a bangers and mash dinner for getting to the end! What was even better was meeting up with our friends and swapping horror stories about the horrific weather or how few points we may have scored. 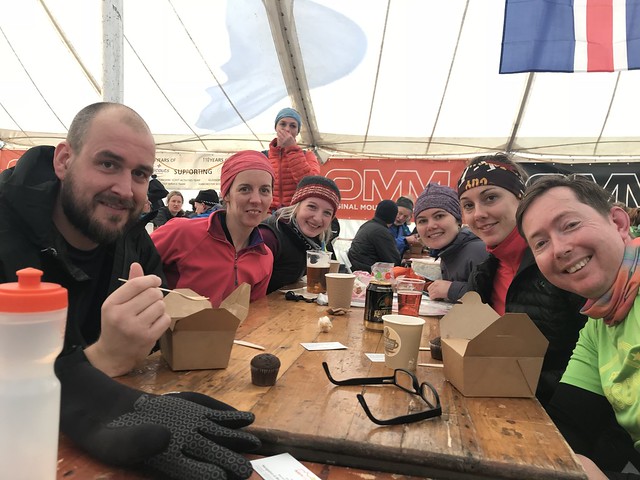 Going into this, I did think that finishing at all would be good and not being last would be fantastic but i’ll be honest, I didn’t hold out much hope for the second goal. We had walked, rather than ran more or less the whole thing. On day one we had lost most of the points we had accrued and on day two hardly scored any at all. We ended on a grand total of 62 points. What I hadn’t reckoned on was that loads of folk on the ‘short course’ were late on day one, some even had negative points. We finished an almost respectable 114th out of 138 finishers in our class. I heard over 150 teams had simply pulled out the first day. Sometimes, just persevering can do it. 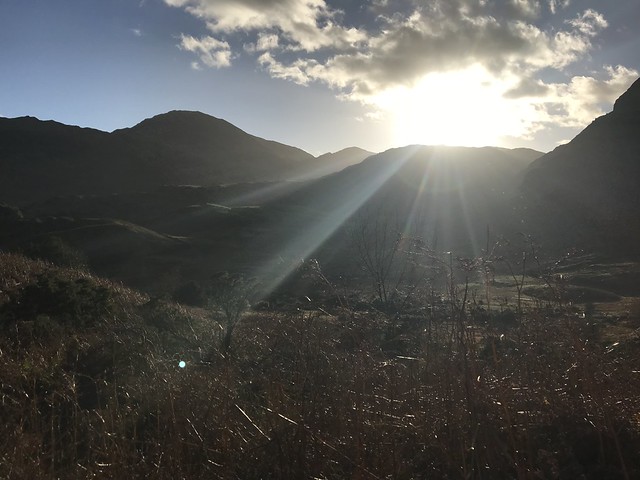 Would I do it again? Of course I bloody would. I really hope to be back next year, fitter and more experienced!

Massive thanks to Michael for being an awesome buddy. Thanks to all my other friends from Project Awesome that were there, you are inspirational!