This microadventure started with the unusual motivation of needing some new trail running shoes. I had been very happy with my Salomon Speedcross 3 shoes that i had run almost to pieces. When I spotted an event that included a complimentary pair it seemed a no-brainer to sign up.

The SupBikeRun Night Trails offer a 2 hour off road mountain bike in Houghton Forest and the South Down’s followed by a 5-7.5 km trail run. They let you borrow a bike and give you the trainers. 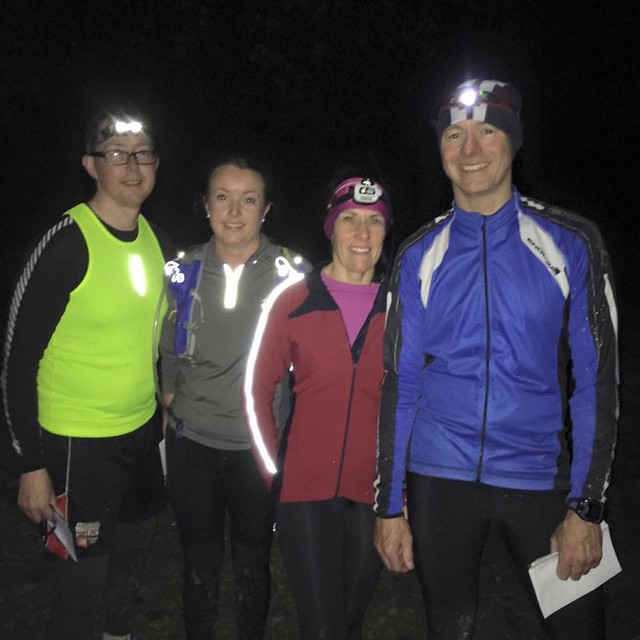 Mountain bike
It was a long drive from London to a small parking bay near Arundel, Sussex and with a bit of traffic congestion I arrived only just in time. With barely any time to say more than ‘hi’ to the three other travellers I found myself quickly paired up with a mountain bike (with ‘fat’ tyres) and we were on our way! 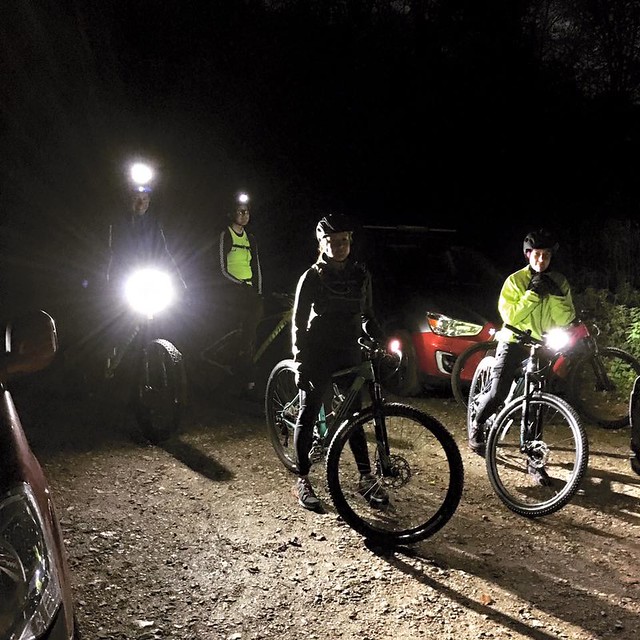 I do a fair amount of exercise but I do hardly any cycling and this was a tough two hours up and around the south downs. The paths were often slippy and muddy and there were a few proper savage climbs. I may have even pushed the bike up a particularly tough bit.

It was, however, pretty cool to be doing this on a crystal clear night under the stars. Finding our way wasn’t too big a problem as we had some powerful ‘exposure’ headlights illuminating the path. I’m told we did a figure eight but to be honest, if our guide Sam had left me behind I may still be up there now! The last section was a fab single track downhill through a tight packed wood. Definitely the highlight for me! 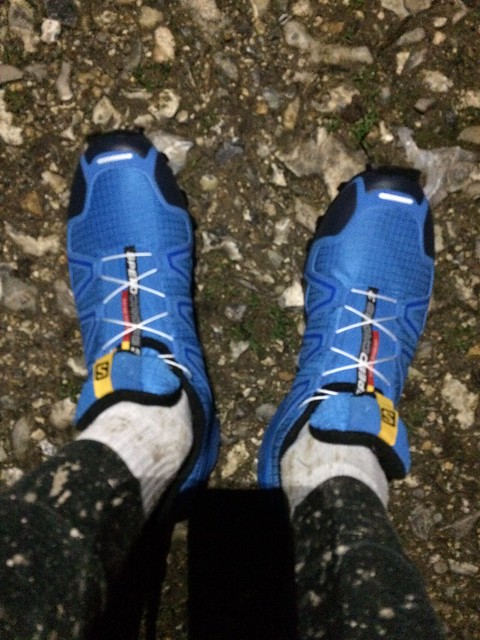 Trail run
It may have only been two hours in real life but it felt like midnight by the time we got back to the cars. Here we had an energy giving giant cookie and a slurp of water before being handed our brand new trail shoes. I was pleased to get a nice blue pair! 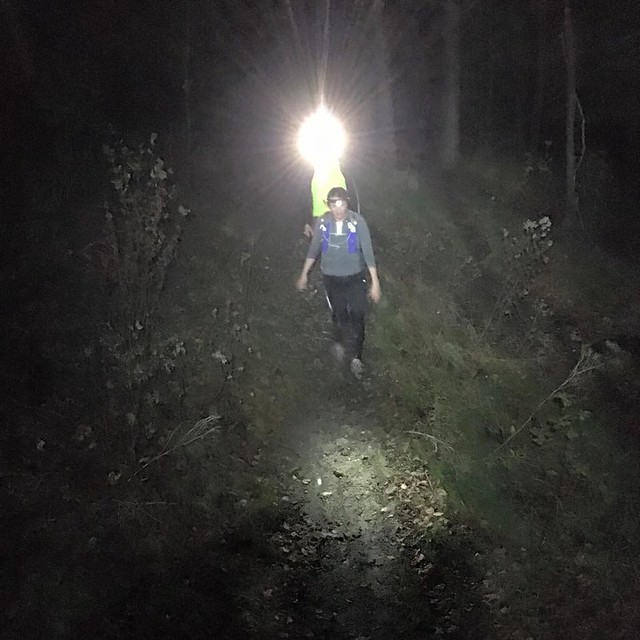 Head-torches on, off we went for an invigorating 40 minute trail run through the forest. I’m glad that my new Alpkit headtorch gives out a good 190 lumens as care really needed to be taken with footing with numerous tree roots and branches were there to trip the unwary. Somehow I got through it with no twisted ankles and the shoes turned out to be a perfect fit and really handy on the slippy surface.

Instead of going on forever like the cycle, the run seemed to end before I knew it and we were back at the cars. All good though, what a cool adventure! Shoes showed at least some muddy respectability by then too! 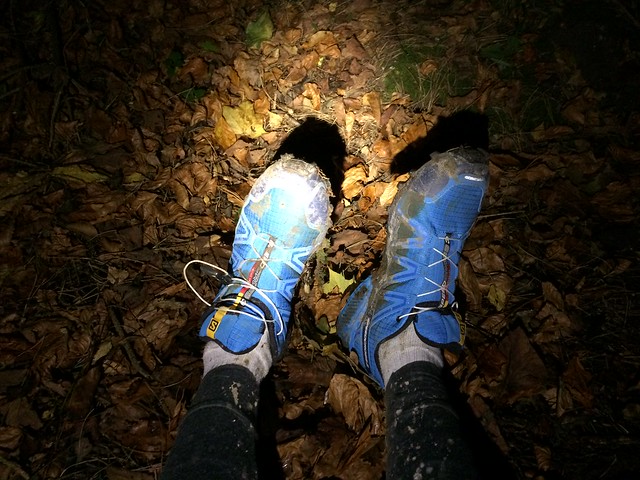 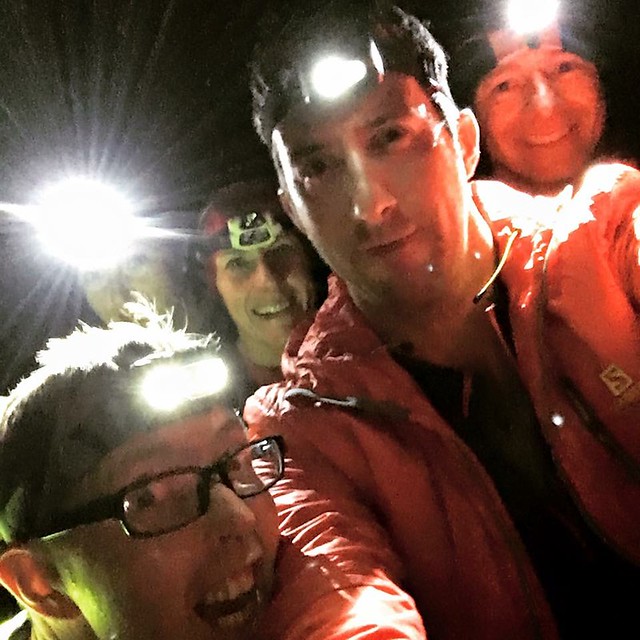 Bivvy in the woods
Feeling a bit tired but far from ‘smashed’ after nearly three hours of zooming around I now had to decide what to do next. I had brought along my #microadventure kit bag but had planned on seeing how I felt on whether to try and stay out or not.

I have to be honest, much more than my previous adventures, I felt really really nervous about this one. If I was nearer to home I may have even gone there, but thankfully I found some ‘steel’, ‘manned-up’, grew a backbone etc. and went for it.

Shouldering my bag I started walking up the gravel path, scanning the forest to side of me for a suitable spot. I wanted somewhere flat(ish) but next to some trees so that I could set up a shelter. This proved a harder set of criteria than I would have imagined. The ground was either clumped with brambles or on a severe slope. Not quite despairing, I carried on till I found something suitable. 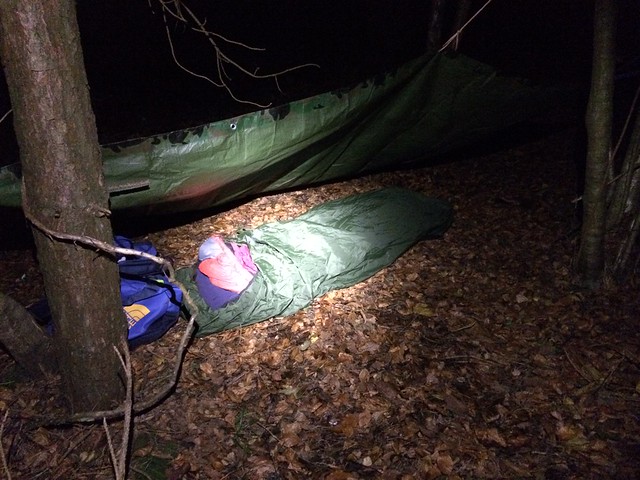 Once I picked a spot and had started putting my ‘basha’ [tarpaulin shelter] I relaxed a bit and my nerves went away (for now). Despite only being about 10 metres from the path, my camouflaged basha (plus real leaves scattered on top) made me feel I would be hard to spot from the path if an early morning walker came this way.

The sky was clear now, but rain was due in the morning and I was pleased to be prepared for the worst. By the time I was ‘in bed’ it was 2130 and time to sleep, I was certainly tired enough. It is a bit of a creepy cliche, but the fairly continuous calls of owls did get me nervous again. I wasn’t sure if it was one owl moving about or several answering each other but at one point the calls seemed to be approaching me. I also heard the call of something else, possibly a fox (probably not a werewolf). For a city boy like myself this is all wonderful and at the same time, quite unsettling, especially on my own.

Despite all this, I DID get to sleep and only woke once or twice. It was a cool night but far from bitter and I was cozy and warm. There really is something cool about sleeping with a night breeze on your face.

Not sure it is in the spirit of wild camping but I actually set my alarm for the morning as I wanted to get home as quick as I could. In a mere 15 minutes I was all packed and in another 15 I was back at the car, making myself a quick coffee on the stove before heading home.

What a super evening and night of adventure!

It was likely to be a lovely day, my friend Andy and I wanted a little off-road action but didn’t want to travel too far. The interesting looking 25km circuit around Igtham Mote looked ideal!

One description of the countryside around this bit of Kent would be ‘quaint’. Certainly quintessential of the ‘Garden of England.

We saddled up in the (free) car park at the lovely National Trust site and set off along field edges and through little wood copse coming across the odd small road or path. Considering the niceness of the day I was surprised not to find more people out enjoying the good weather. maybe they were at the beach?

At the time of the ride (late May) we found the woodland floor covered in great swathes of bluebells. This was great viewing. We went through the picturesque village of Plaxtol, meredith woods and then back towards Igtham itself. It was mostly very pleasant riding on bridleways (though it was very dry) with only one major uphill section.

In all a really nice couple of hours, the only shame being we didn’t have time for a look round the mote itself. Maybe next time?

See all the pictures from the day.

For the last five weeks I’ve been cycling the 12km to work and back every few days. At first it nearly killed me as I have two stiff hills to get over but this week I was starting to feel ok. In a desire to take things a bit further on the biking front I really fancied doing some proper off road stuff and when Andy suggested going for a canter round Bedgebury Pinetum I jumped at the chance.

Bedgebury is in deepest Sussex, near the town of Flimwell and is essentially a large wood cut by tracks, paths and a few lakes. What makes it such a good outdoor venue is that caters for all levels of ability. There is a tricky (and very muddy) single track for the more serious mountain biker but also a variety of paths for family  cycling or just some nice places to walk.

Despite it being our first bit of mountain biking, we of course opted for the ‘difficult’ single track route. Looking back I think we were very cautious and hesitant at first, but the longer we rode, the confidence grew and the more fun it got. By half way round I was really loving it. To start with I made a point of trying to avoid the worst mud or the deepest puddles but it wasn’t long before this just became part of the fun! The course was challenging but nothing that I thought was too bad for the average enthusiast.

We stopped a few times to take photos, trying our best to look ‘action’. Getting a good exposure was difficult as it wasn’t a bright day which made for quite a gloomy forest. Next time, I may bring the flash!

The cycling was book-ended by tea and cake in the perfectly good cafe (pineatery) that overlooks the lake and before going home we hosed down the bikes at the washing station. If you don’t have a bike or don’t want to bring one the shop here has a large range (including jump bikes and kids bikes) which looked fairly good.

Overall a really good venue for a day in the country and next time I’d like to bring the family too.