Even by Icelandic standards (pretty damn high), our Airbnb house was just plain amazing. I woke up fairly early, around 6am, to discover a light dusting of snow outside. Like a ten year old boy I chucked my coat and shoes on (and camera of course!) and ran outside practically giggling to myself in excitement. 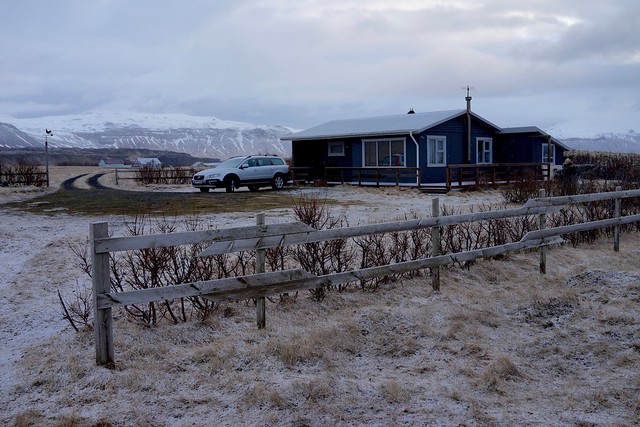 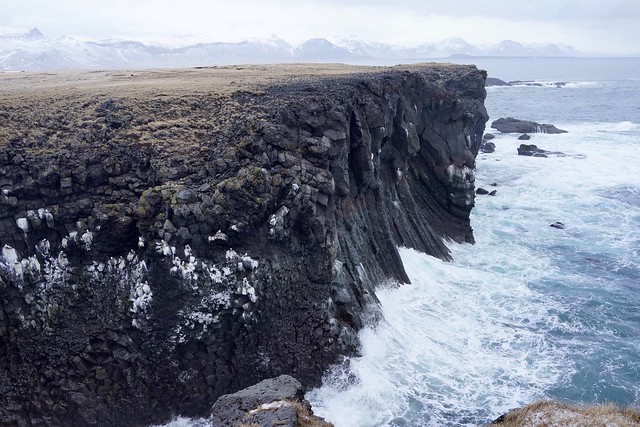 I walked down to the cliffs, the freezing wind in my face, in awe at my surroundings. It was just brilliant! After about half an hour the urgent need for coffee and warmth drove me back to the house. A bit later, after Gil and Nicola has gotten up and we’d all had some breakfast, it was time for some proper exploration. We decided to try the short walk down the coast to Hellnar. 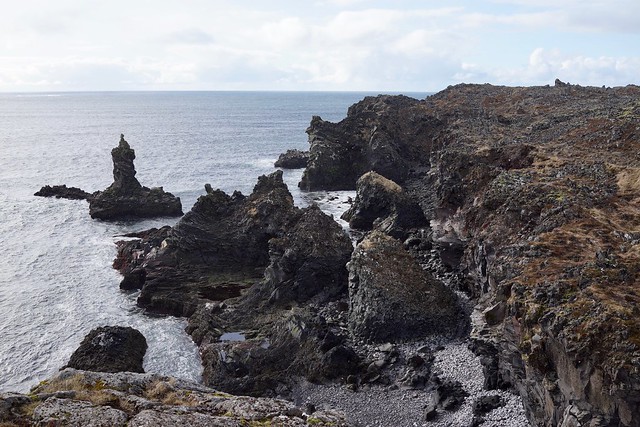 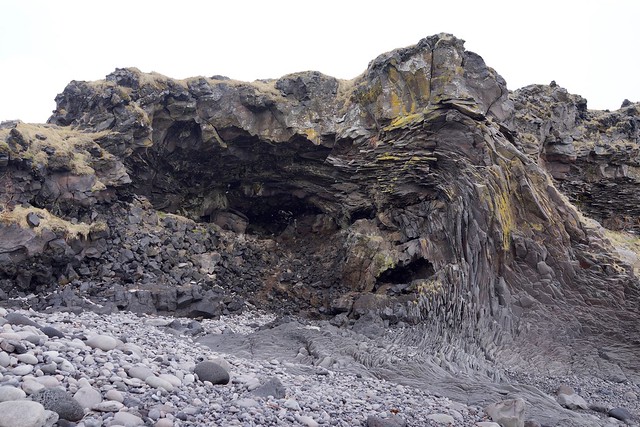 A superb 5km round-trip along the rugged shoreline gave us a good appetite for lunch. In the afternoon we fancied a drive and explore of the Snaefellsjokull national park. It was a bit snowy and the landscape looked suitably wintry. 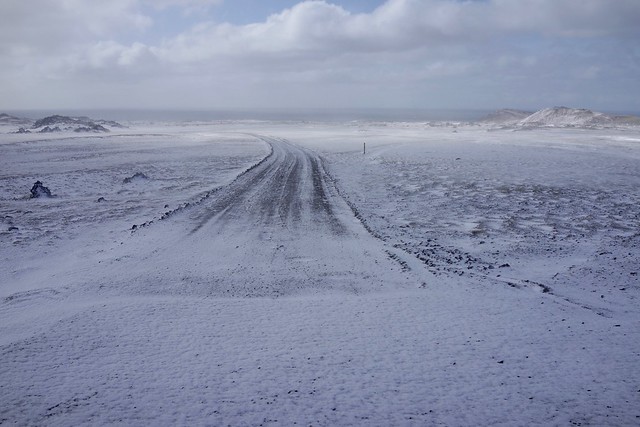 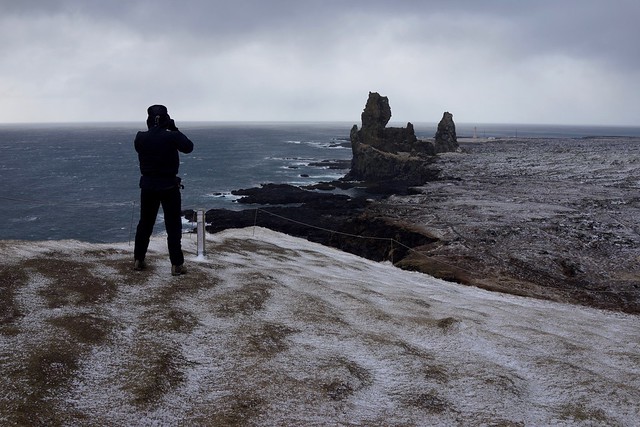 Only certain sections of the park were icy, others seemed almost completely clear and the weather varied from snow to hail to sleet to bright sunshine. This is Iceland. 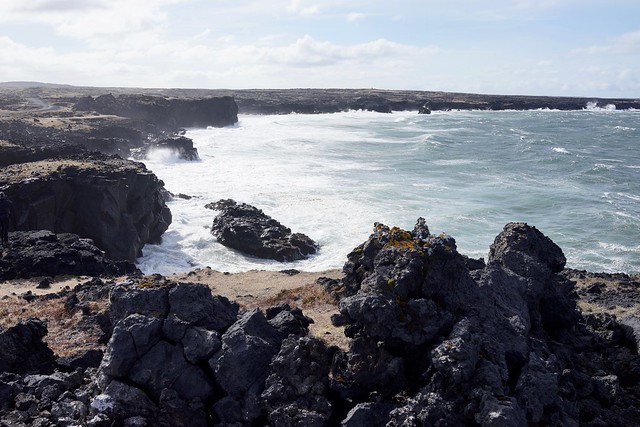 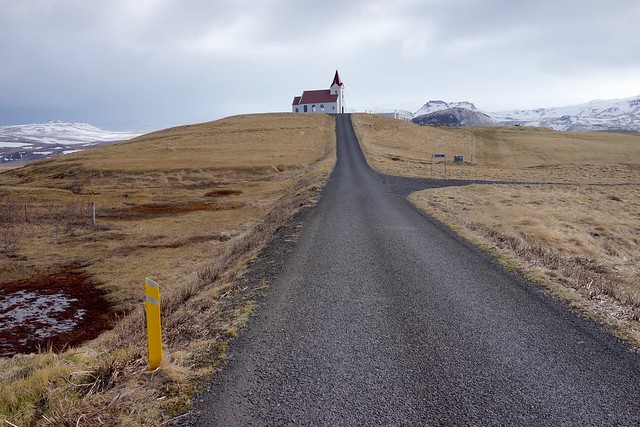 We drove all the way round the coast to Grundarfjörður with the intention of scoping out somewhere to stay the next day. When we saw that the town looked out on Kirkjufell (one of the prettiest hills in the world) we knew we’d found a great spot. 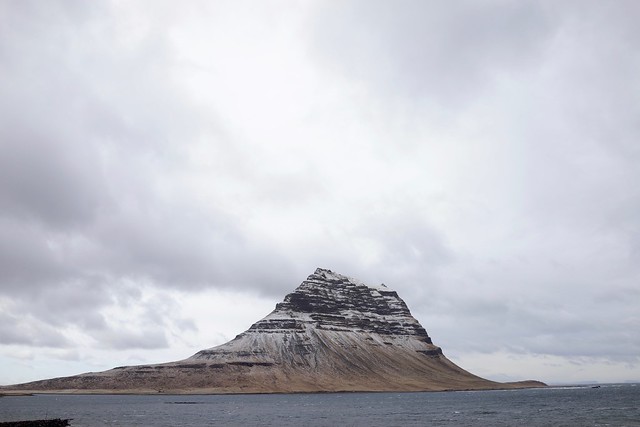 Just how was the next day going to get any better?

A week after my walk up Esja, just outside Reykjavik, and after a conference I was attending my Iceland mini-break really started. My lovely work colleagues Gil and Nicola and myself had hired a car (an all-wheel drive Volvo XC70) and had the whole of Iceland (potentially) to explore. Where to go? 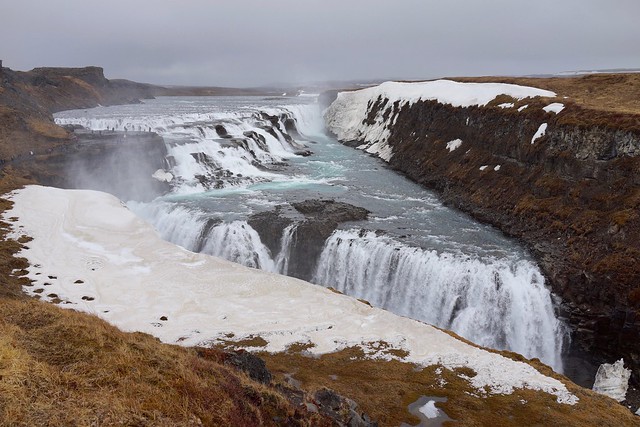 Gil and I had been to Iceland before but this was Nicola’s first time but I think it’s fair to say that the place never loses the magic. First up, we headed out to the ‘standard’ tourist stuff near the capitol – The Golden Circle. There is a good reason that this is where all the ‘time limited’ visitors head to – it is pretty damn good. 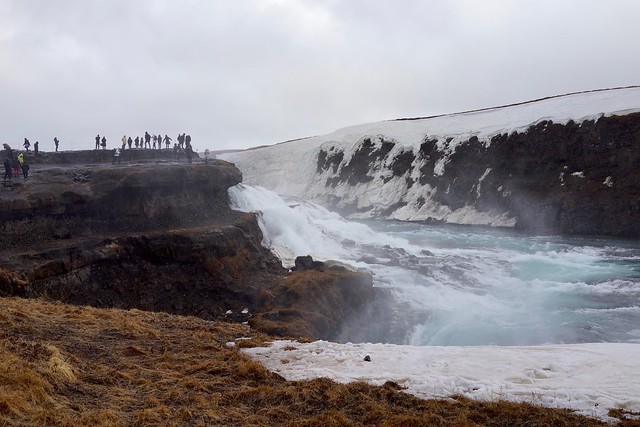 First up for us was Gullfoss, one of the ‘big’ waterfalls of Iceland (and probably the world). For someone from the uk, Iceland really does set a different benchmark for what constitutes a major waterfall attraction. It was a bit cold and rainy while we were here but that doesn’t matter too much with all this spray. 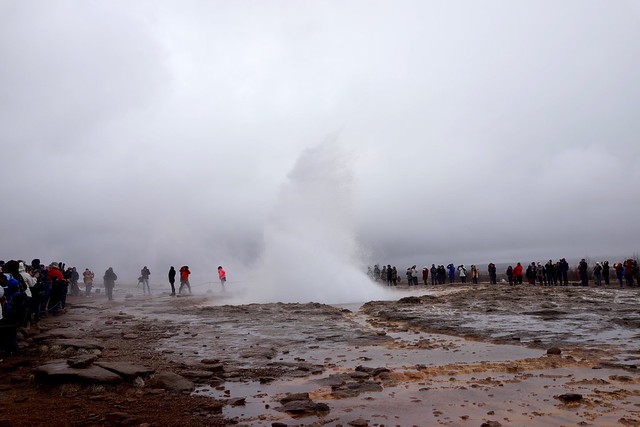 Next up is the famous ‘Geysir’. Not the original one (after which all geysers are named) but ‘Strokkur’, one that seems to reliably go off every 5-10 minutes. I feel a little bad that I did the totally tourist thing of wait till it went off once, take my photo and leave. It felt a bit predatory. We did, however, have a lot to see and do today so no time for slacking! 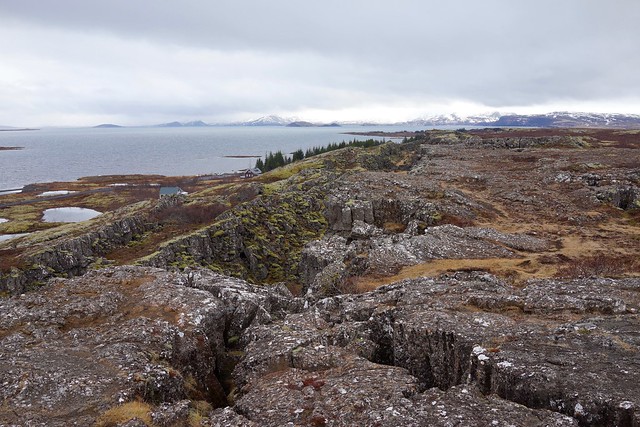 The last bit of the ‘Golden Circle’ is Thingvellir (Þingvellir). It is the site of arguably the first parliament in the world and is also in the valley that marks the divide between the European and North American continents. I was a bit disappointed that there wasn’t a tacky sign offering visitors to have one foot on each continent that I could disapprove of. Unless there was one and I just missed it. 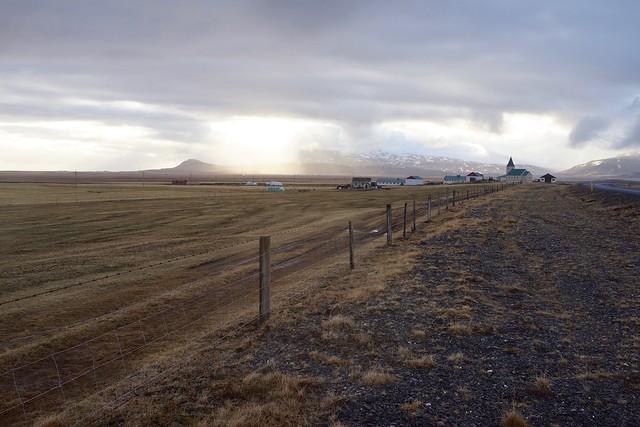 Right, Golden Circle done it was time to head north to the Snaefellsnes Peninsular. The road north gave us some wonderful views, especially as the sun was peeking out from behind the clouds. This countryside is fantastically rugged and primal feeling, even with the odd farm and town. 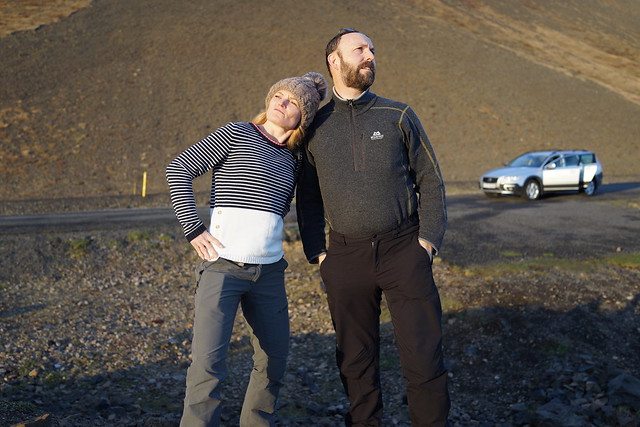 We had booked an Airbnb almost at the end of the peninsular and it felt like the ends of the earth. We were in the town/village of Arnarstapi right by the sea and backed by the mountains. 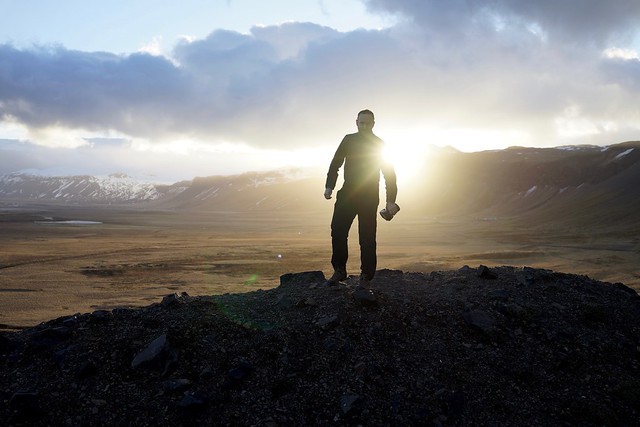 We got there late and rushed to open some wine, get some food on and get the fire going. I do love making a fire. 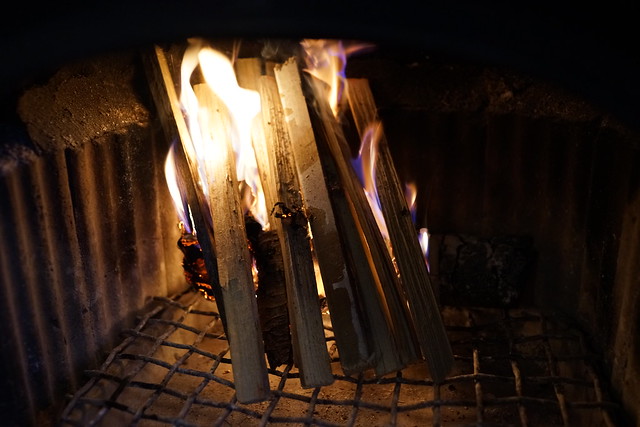 I’m a lucky boy in that my work occasionally sends me to nice places. This year it is Iceland. 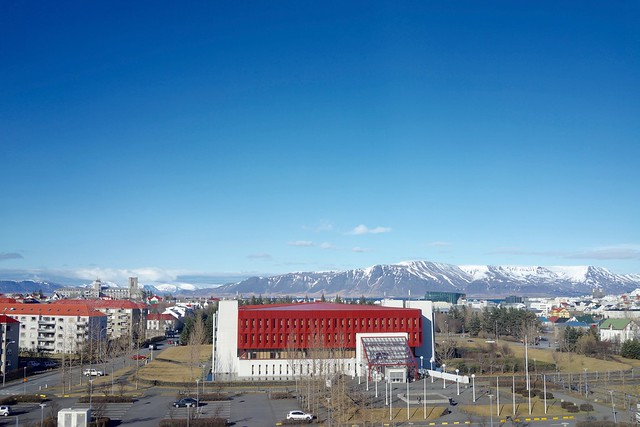 Esja
Going to Iceland in April, no one should really expect very good weather. In many ways you should never expect good weather at any time in Iceland, but April is a particularly tricky month. It might still be winter or spring might have arrived. Fortunately, spring was here for most of the first week. Every morning I was greeted with a sunrise over the local mountain, Esja, and blue skies. Gorgeous! 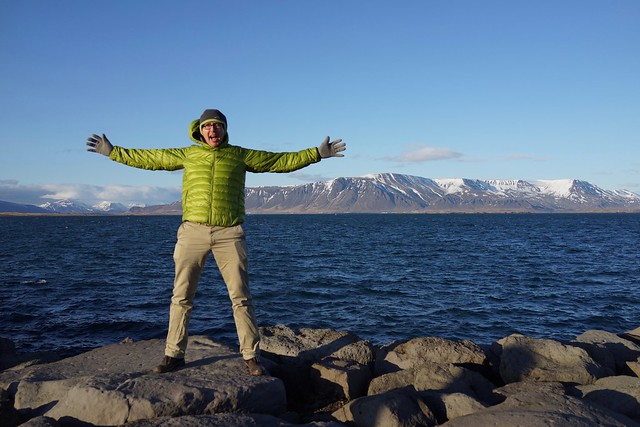 I managed to find half a day and made the effort to give Esja a go. Two buses later I was at the hiking centre at its base. I wasn’t alone in wanting to make the most of the lovely weather – quite a number of people were streaming up and down. 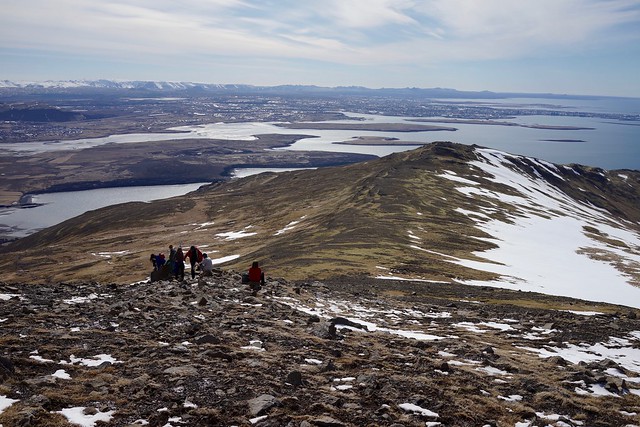 Seeing all the snow on top, i’d packed more or less all of my warm gear. It goes without saying that very soon i’d stripped off all my outer layers and was getting quite a sweat on as I climbed. The path was clearly defined, though very muddy and with snow patches in places. This was also my first try at using walking poles. I’m not sure how you are supposed to use them but they seemed to help, particularly downhill. 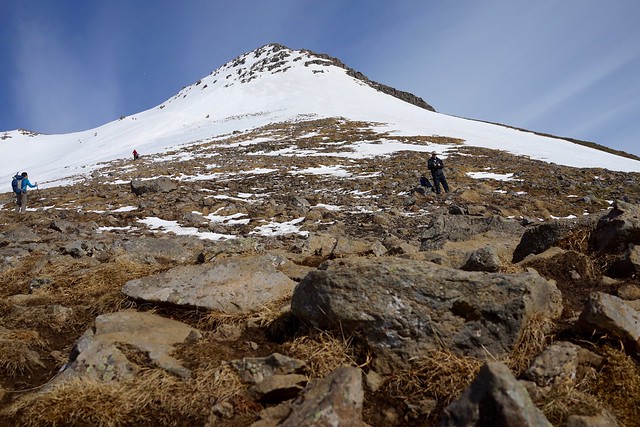 Near the top the path becomes very steep and turns into a snowfield. A number of previous walkers had kicked steps and made a path of sorts. I was very concerned about making my knee injury worse but thought I should at least try and get to the top. I got with about 50 metres of the top but after slipping and nearly twisting my leg a few times I decided to call it a day. 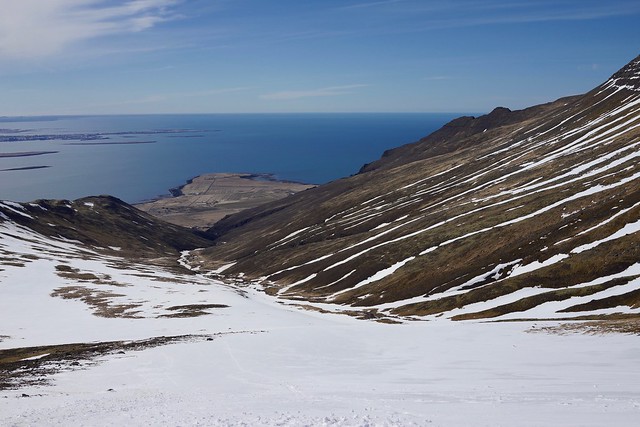 I reckoned that the quickest and easiest way down was a (controlled) slide on my bum. This did get me down but I did then have a soaking wet seat of my trousers. It WAS fun though!

I then walked down in plenty of time to catch the bus back to Reykjavik. Fun times! 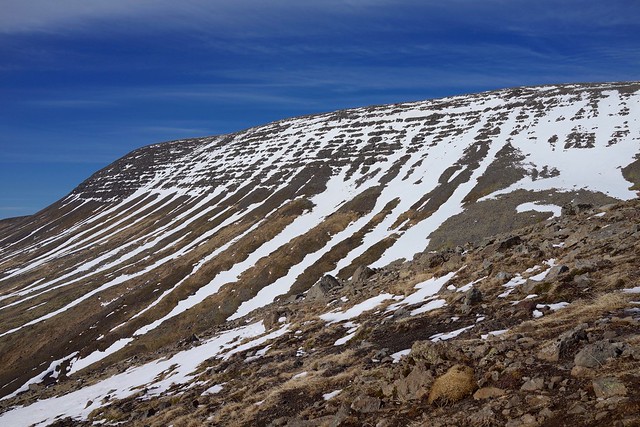