Norway is an amazing country but it is also a pretty expensive place to visit. I did, however, manage to visit the wonderful Lofoten islands (from London in the UK) for six days without breaking the bank.

My basic plan was to try to only spend money on the travel (flights and ferry). This would entail wild camping (which is free) and taking all of my own food for 5 days. Being a major cheapskate, I also made up my own dehydrated breakfast and dinner meals (see appendix for details). 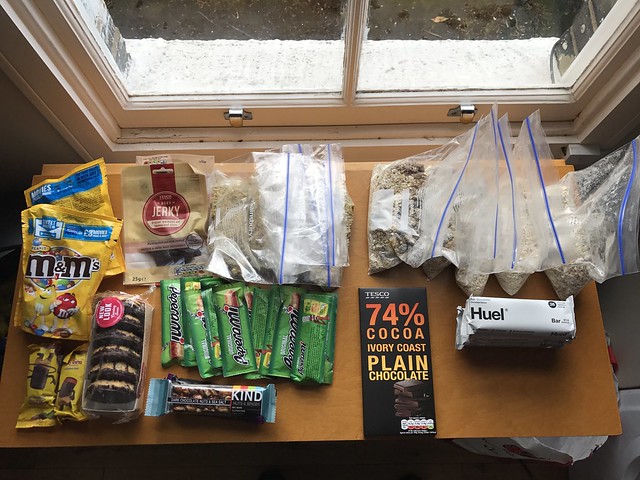 I booked a very early morning flight from London Heathrow (after spending an uncomfortable night at the airport) to Bodø (via Oslo). The flight touched down at 1430 and I had exactly one hour to make the ferry. I’ll be honest that I never thought I’d have any chance of making it! The consequences of missing the ferry would be to wait for the midnight sailing (eek). I’m delighted to say that Bodø airport was very efficient in delivering my rucksack and is also only just over a mile from the ferry terminal. I was comfortably on the ferry in 40 mins. Win!

Note on travel costs: I was a little late in booking so my flight costs of £280.00 could almost certainly have been cheaper. The ferry was about £20.00 each way. 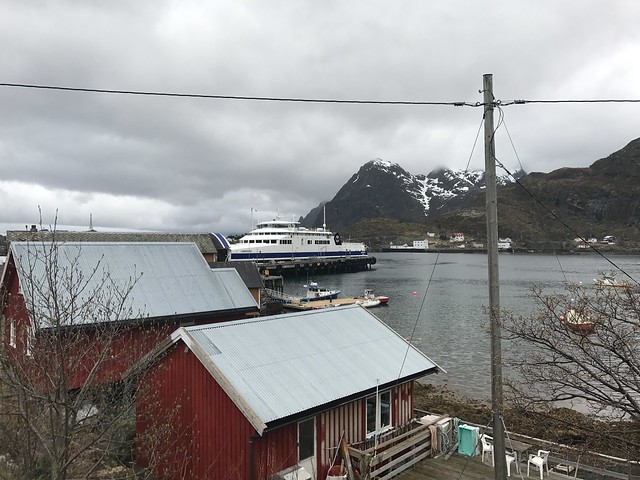 Arrival
I got off the ferry at Moskenes, located towards the western end of the Lofoten Islands at 1830 in the evening. My first, and really only worry, was trying to find a gas canister for my stove. It was going to be a tricky trip if I couldn’t boil any water!

I’d done a bit of research and the nearest place to buy camping gas was in Reine, 4-5 km away. I shouldered my pack and started my walk, some of which was on the road and some on a path (actually the old road). 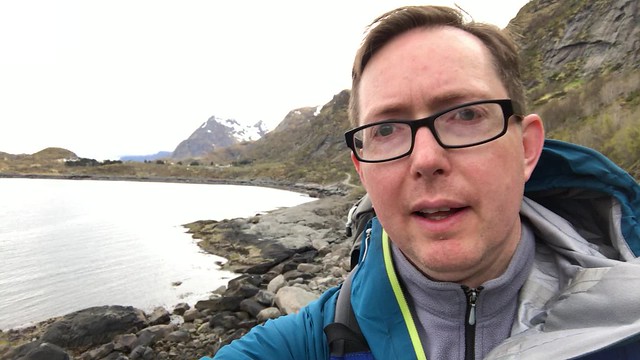 Lucky for me, the gas station in Reine was open and actually sold the type of canister I needed. Slightly unfortunately it was an enormous one that i’d never use up during my trip. My map of Lofoten seemed to indicate that there was a campsite in Reine but it turned out that this was total fiction! Not a major problem as I walked back towards Moskenes where I had spotted a couple of camping spots by the side of the path. I was sorted! 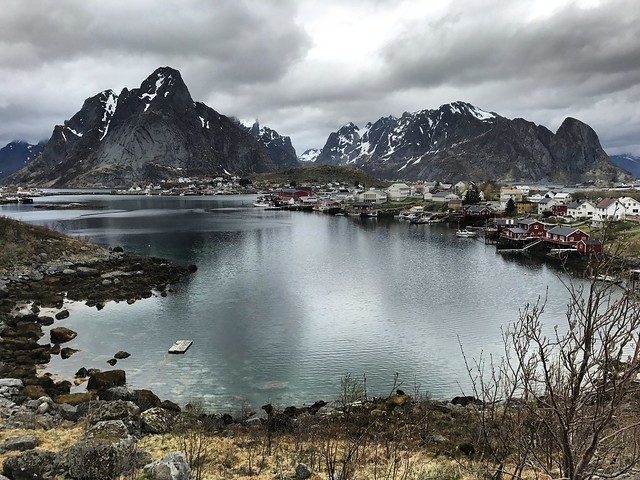 Day 2
In London, the weather in late May was pretty balmy, in Lofoten, which is well above the arctic circle, it was quite cold – 6-8C. On my first night it was also very rainy and windy and when I woke up I was reluctant to pack up and go until it stopped. My little one man tent (MSR Hubba HP) was pretty snug and comfy and I managed to safely make coffee and porridge in the porch. The rain stopped about 1030  and I headed back into Reine. 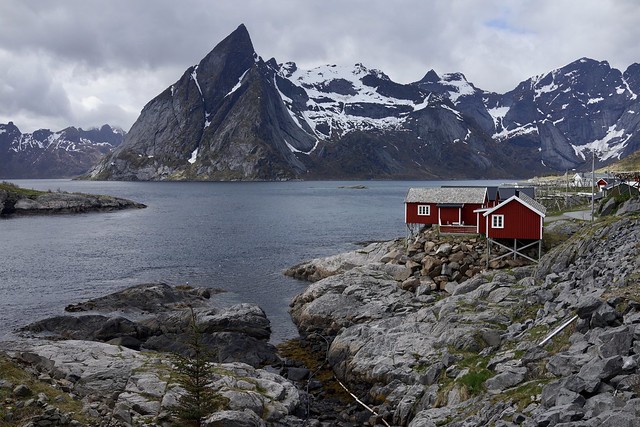 My original plan to was to get the ferry from Reine to Vinstad but i’d stupidly forgotten to look up the timetable before I left and had missed the morning ferry. The timetable is written very oddly (to me at least) and I didn’t think that there were any other ferries that day so decided to walk around the fjord/bay. Note: I later discovered that there was an afternoon ferry that I could have gotten. Doh! 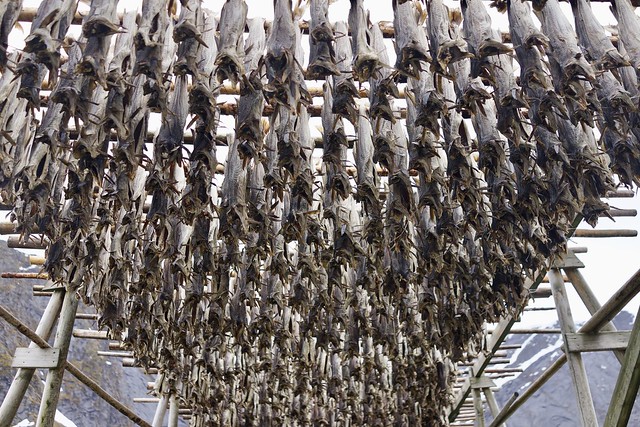 The Lofoten islands are famous in the winter months as cod fisheries (cod spawn here), following which the fish are hung out to dry. These drying racks are around all of the little villages that I saw and yes, the places do smell a tad ‘fishy’. 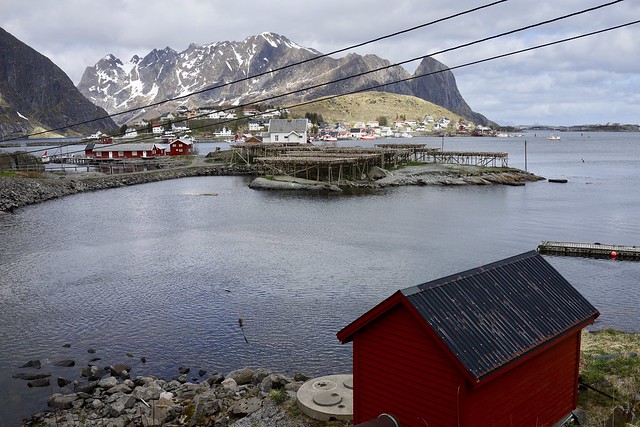 One thing became pretty clear to me was that there really isn’t much open here. I won’t complain too much as I did have literally world class scenery to look at but it’s worth noting that in bad weather there aren’t many indoor activities. Luckily for me the weather was sunshine and cloud without any rain. What it wasn’t though was very warm and I was grateful for a cafe/bar to open in Reine in the afternoon. I splurged what I think must have been a million pounds on a pretty decent cake and an awful coffee. I did take the opportunity to use the wifi to contact to the family and brag a bit on facebook and instagram. 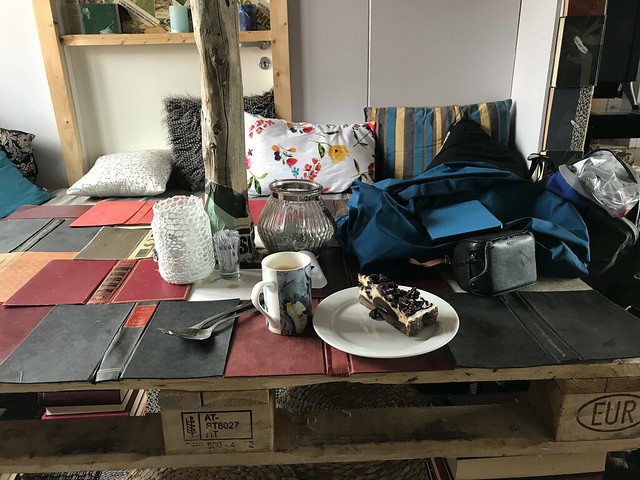 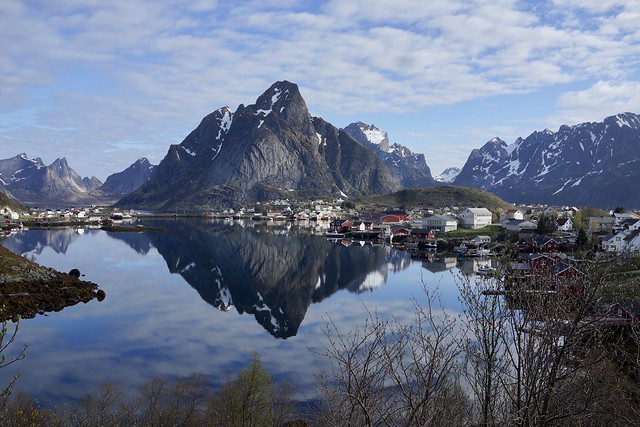 When i’d had enough of looking at mountains soaring out of the sea I retreated to the same campsite as the previous night and hunkered down. 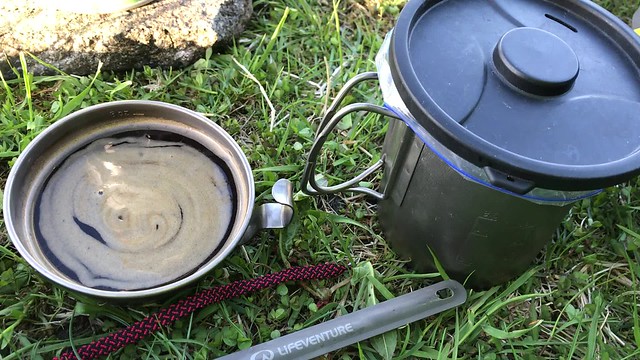 I woke up early on this amazingly sunny and beautiful day in order to get the early ferry from Reine to Vinstad. Despite it still being the ‘winter’ season, the boat was full to the gunnels. 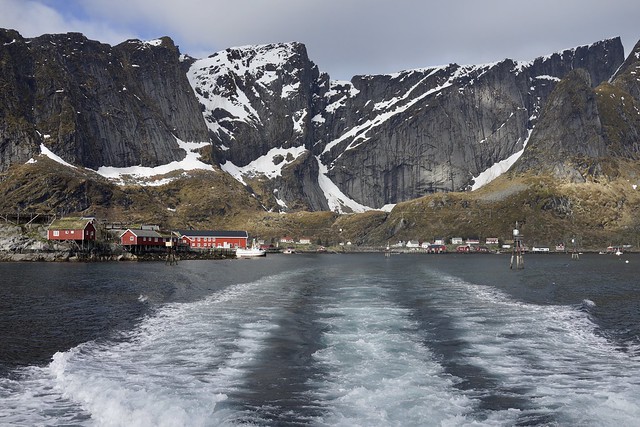 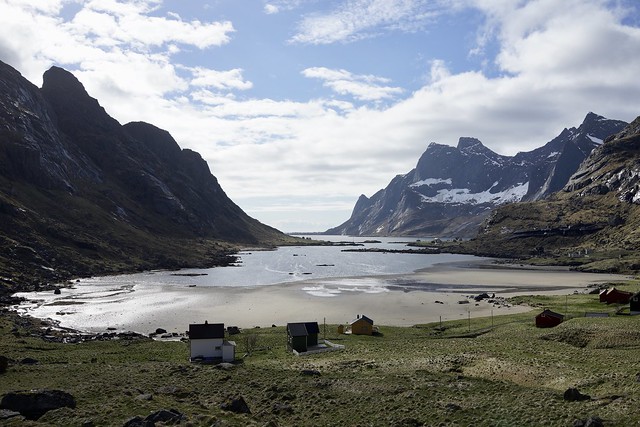 After arriving at Vinstad, I walked (along with a a small group of fellow tourists) up through this small community, over a small pass to the breathtaking Bunes beach.

The beach seems, at first, to be quite small but it is only an illusion created by the height of the substantial mountains that surround it. I rushed down as soon as I could, dumped my bag and then with only my phone and a towel headed for the water. I wasn’t going to miss an opportunity to swim (or in this case briefly dip) in the Arctic Ocean. 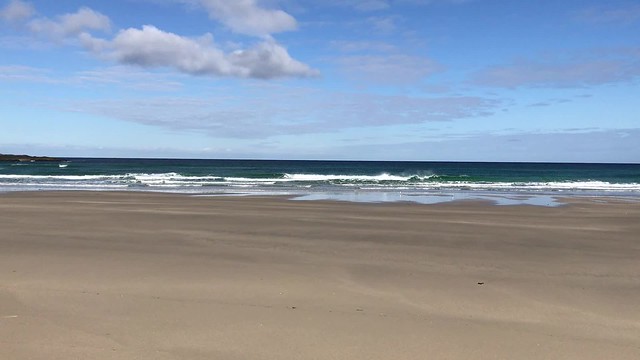 It was cold, but oh so glorious! Plus I saw an avalanche (my first)!

I ended up staying at Bunes beach for more than a day and a half, walking around the beach, gazing out at this amazing beauty or reading my book. The weather was wonderfully sunny all the time I was here although it was never warmer than 8C and the wind was often high creating quite a wind chill factor. There is a drop toilet at the back of the beach (without a door) but I avoided it as much as possible.

I’ll confess to being a little disappointed that I wasn’t the only person to sleep on the beach overnight. I really fancied being alone here. To be fair to my fellow campers, they all kept themselves to themselves and I wasn’t disturbed at all. 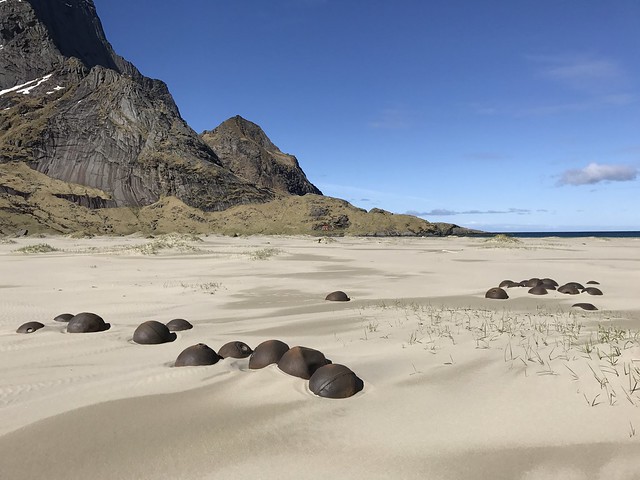 [Note: These strange hollow iron balls were washed up on the beach. What are they? Pretty sure they are not cannonballs.]

After lunch, I packed up my stuff and headed back towards the ferry point. I decided to attempt to walk further down the fjord as there was a tall and amazing looking waterfall at the end. 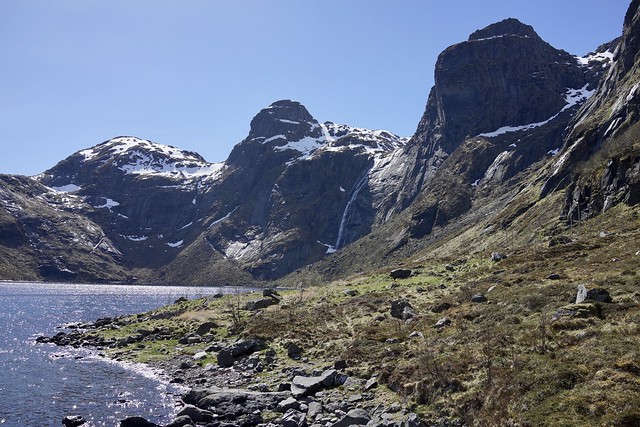 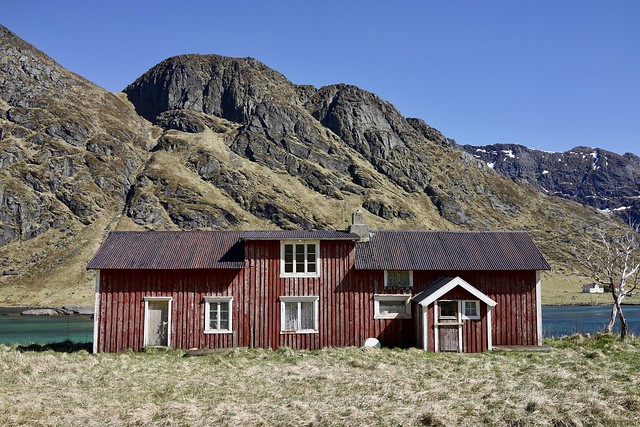 As I caught the ferry back to Reine, the sunshine was replaced by cloud and it got distinctly chillier. Back in ‘civilisation’ I had a sandwich and coffee (another million pounds) in the cafe and then headed back to my usual wild camping spot for the night. The night was pretty windy and rainy! The tent was solid though!

Day 5
This was pretty much my last full day in the Lofoten’s but bearing in mind that I needed to catch a super early ferry in the morning I didn’t want to go far. I therefore decided to walk to the end of Norway itself! Well, the western most point that can be reached by road. 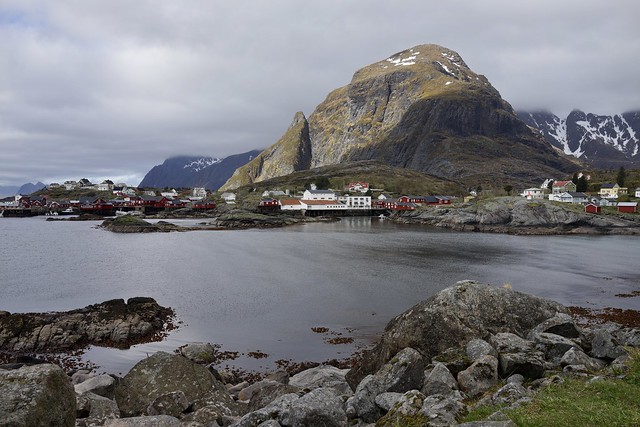 I walked through Moskenes (apart from the ferry, not much here), Sørvågen (more stuff here but all closed), Tind (more or less nought) and finally Å (yes, just the one letter). 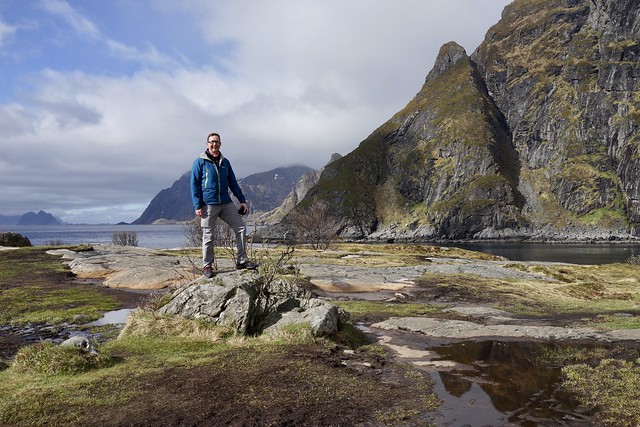 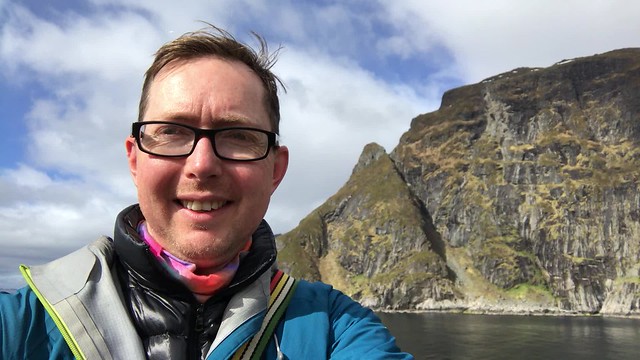 As with just about everywhere else in the Lofotens, the views were just spectacular but it did feel quite special to be at the end of the road. Å also boasted some actually open places too. The stockfish museum (which I didn’t go in) and a wonderfully rustic bakery selling a delicious cinnamon roll and totally wonderful Barley bread. The coffee was awful but you can’t have everything! 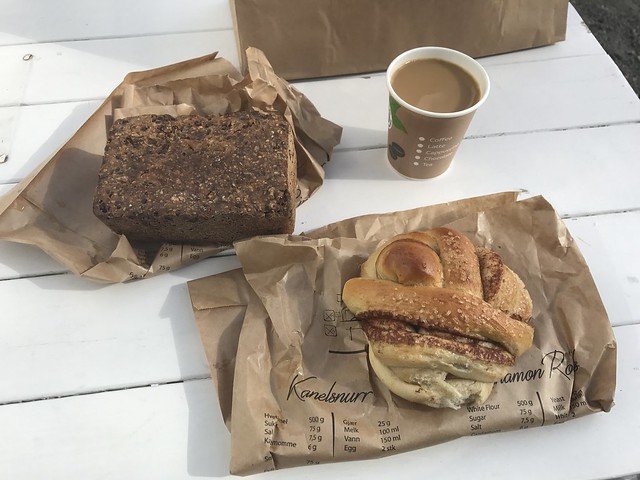 The sun was still out and I decided to take the footpath from Sørvågen up to Stuvdalsvatnet, a lake surrounded by mountains. It is a bit of a stiff climb but the view is stunning. The path continued up to a mountain hut called Munkebu but I decided not to go that far. 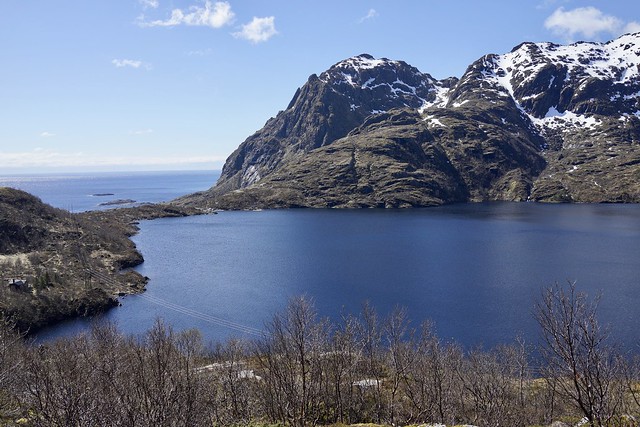 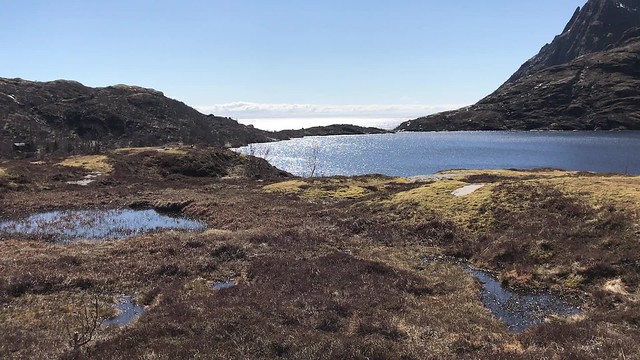 I have to say though that this was a glorious way to spend my last afternoon. I was a tiny bit disappointed to learn that you could neither swim nor camp here but considering this is where everyone gets their drinking water from it was fair enough. It was my initial plan to not stay in any formal campsites but my hygiene situation was such that I decided to relent tonight. I’d only had a sea dip since i’d been here and I was starting to find myself a bit unpleasant! 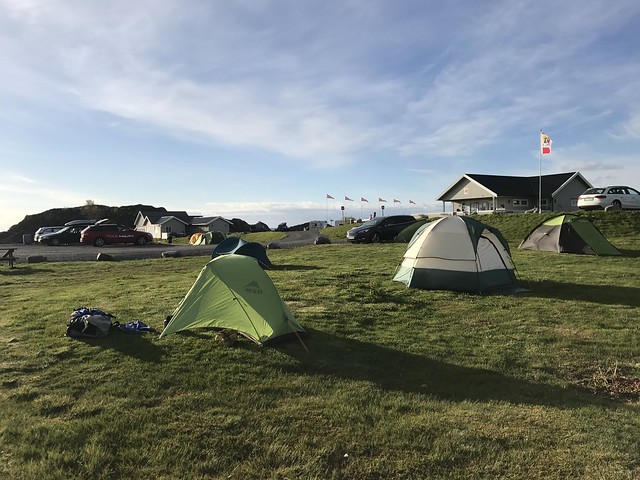 The campsite fee turned out to be the equivalent of £13 which in effect was what a shower was costing me. Annoyingly there was a ‘pub’ but of course like most things here, it wasn’t open. At least it stopped me spending £10 on a pint of lager!

Up at 05.30, I had my usual porridge and coffee before quickly packing up my stuff for the trip home. I was at the ferry in plenty of time, indeed I was second on the boat for the trip back. 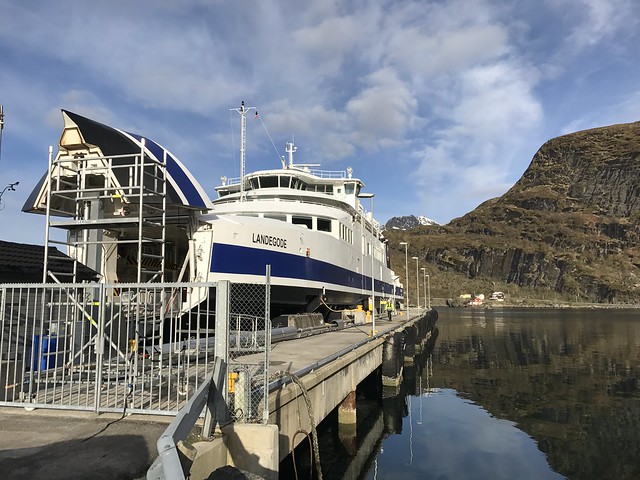 The ferry trip was uneventful (I slept some of it), as were the flights. I spent a bit more time in Bodø than on the way here but it didn’t strike me as all that exciting (sorry if I missed the good bits).

Well, firstly, I really can’t recommend the Lofoten Islands enough. World class, breath-taking scenery in every direction! Going in late May before the ‘summer season’ started did mean that it was still pretty chilly even on the sunny days and that very little was open.

It’s possibly worth noting that I didn’t really go very far (in terms of miles) on this trip, partly because I was walking with a 16-18kg rucksack at all times. I made a decision before I came that I wasn’t going to bother with the infrequent bus service. It did limit me, but I can’t say I regret it as it was all awesome more or less all the time where I was.

I’m also fairly happy with managing to keep costs to a minimum. I did end up having a few cafe visits but this was OK for me. I actually came back with some food so i feel pretty good about how much I packed. I wasn’t in any danger of going hungry on this trip!

If it had rained for days on end I think it could have been quite grim, considering I was living as a hobo. If you had a car, you could at least go for a drive or go somewhere that has things to do but car hire is quite pricey and it is harder to wild camp.

In short, don’t delay, just book your tickets now! It is a must-see place.

You can get some pretty tasty dehydrated expedition food these days, however, they are also mostly quite expensive, i.e. £5-6 a meal. This really adds up over the course of a week so I decided to make some of my own.

Add twice the volume of boiling water, stir, wait 7 mins, stir again and eat.
I keep the porridge in a platic food bag and use a large mug to keep it in shape. No washing up!

Add twice the volume of boiling water, stir, wait 20 mins, stir several times. I again use a food bag and a mug for stability. Nothing to wash up. [Note: I found this filling but quite bland, next time I plan to add a spoonful of curry paste]